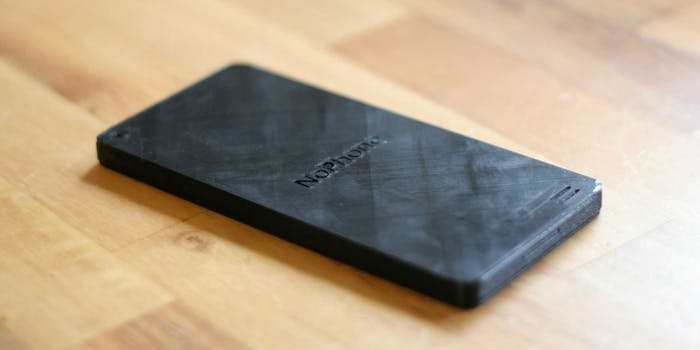 In October, a project called the NoPhone raised $18,000 thanks to Kickstarter. The NoPhone itself is simple enough: It’s a piece of plastic that is the same size and shape or your smartphone. So far, over 2,000 people have ordered one. Which immediately begs the question: Why?

The NoPhone bills itself as “a technology-free alternative to constant hand-to-phone contact that allows you to stay connected with the real world.” There’s a “selfie” feature which has been added (it’s a mirror). Effectively, it’s a dumb proxy for your intelligent phone.

Kickstarter VP of Communications Mike McGregor is one of the NoPhone’s 915 project backers, and he told us about his decision to support it. “The first time I saw it, I laughed. It’s obviously a commentary on a very influential thing that’s taken over our world. It’s pretty insane to think about what’s happened in the seven years since Apple launched the App Store to make our phones even bigger utilities. Can we move away from them, leave them in the other room?”

“It can cause a lot of anxiety, because a smartphone is a constant reminder that there’s always something else happening.”

Anecdotal evidence suggests there’s a very real separation anxiety that takes place if we forget our phones somewhere. If I leave mine at home on the way to work, I’m almost certainly going to go back and get. The thought of being without it is almost overwhelming: It’s my source of directions, it’s my email, it’s all my friends’ contact info. Still, just how real is this “phone separation anxiety?”

CNET calls it “nomophobia,” the fear of being out of mobile phone contact. A spooky majority of us—75 out of every 100 smartphone users—use our devices while using the restroom. (92 percent of survey respondents wash their hands after using the restroom while a mere 14 percent wash their phones.) We simply have to be connected when there’s downtime. “You’re always out of the loop, even if you just checked your phone,” says McGregor. “It can cause a lot of anxiety, because a smartphone is a constant reminder that there’s always something else happening.” 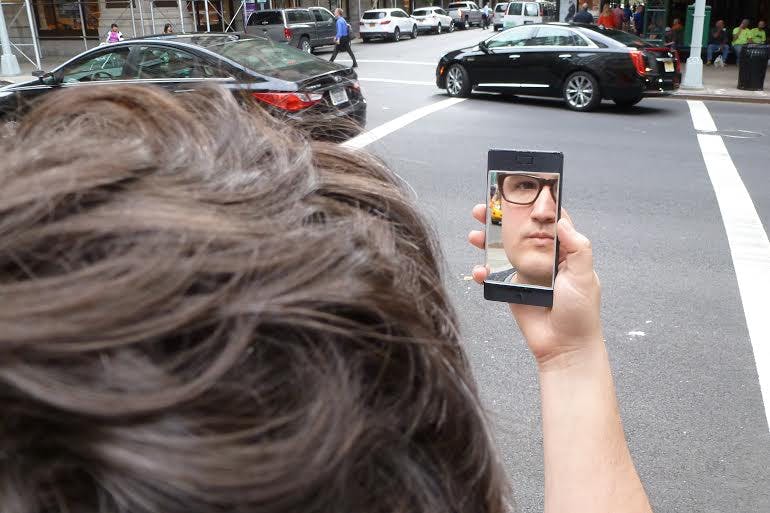 Nir Eyal is author of Hooked, a book that explores how companies create products that are habit-forming. Consider how we eagerly refresh our Twitter feeds, how regularly we log into Facebook. The same brain mechanics are at work when we feel those pangs of naked panic upon realizing we’re without our phones. “Today, companies are designing with the hook in mind,” said Nyal. “Products have evolved to be highly engaging. What makes things awesome also makes them addictive. It’s a fact of the technology we use everyday, and it’s not an accident.”

The addictive nature of our smartphones also applies to the apps that they run. We’re getting it at both ends. “Anything we learn or adapt to using the gift of neuroplasticity, our brain changes.” But is this a net positive or negative? “Certainly both,” said Eyal.

Kickstarter’s McGregor is uncertain of what role the NoPhone will actually play in his life once he has it in hand. “I could see it on my desk as a philosophical totem of sorts,” he said. “The fact that it has no functions makes it a codified thing. The fact that they’re actually manufacturing it makes it transformative.”

Perhaps more significant is what the NoPhone represents. As it’s creator’s explain on its site, “We are selling the NoPhone to give the people what they want, a life of direct eye contact and improved conversational skills. A life beyond a smartphone. A life of NoPhone.”

When you consider that the mere presence of a phone (or phone surrogate), even if you’re not using it, is enough to calm and reassure you, it’s easy to want to reevaluate the way you interact with it. “Maybe it’s OK to leave your phone at home on purpose as a way to create more human engagement,” said McGregor.