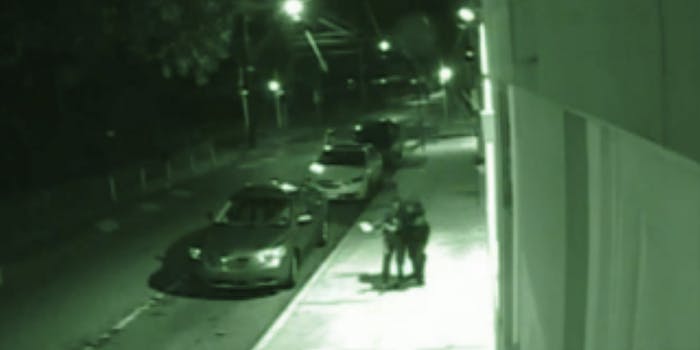 Philadelphia police released a surveillance video Monday that shows Carlesha Freeland-Gaither, a 22-year-old nursing aide, being abducted late Sunday. Detectives are hoping that the video and a $42,000 reward will elicit public cooperation in locating Freeland-Gaither and her abductor.

The video clip shows a man park his car and then cross the street before walking up behind Freeland-Gaither and attacking her on the corner of W. Coulter and Greene Streets in the Germantown neighborhood of Philadelphia. She is then seen trying to fend off her attacker as he drags her to his waiting car—a 2000 dark gray, metallic, four-door Ford Taurus. The two fall to the sidewalk as the man is attempting to push her into the car while she fights to breaks free.

She is thrown into the car and the vehicle is seen rocking back and forth as police report that Freeland-Gaither broke out both of the back rear windows in an attempt to escape. Another car is seen driving up behind the suspect’s as the abduction is occurring but that driver reverses away approximately 30 seconds later. The suspect pulls away with Freeland-Gaither soon after.

Police were able to identify Freeland-Gaither as the victim after finding her cellphone and glasses on the sidewalk, as well as a knife and glove.

The suspect is described as a 5’10” black male, with a medium-heavy build, between 25-30 years old. He was seen wearing a dark jacket with a dark colored hood, possibly a sweatshirt, underneath.

NBC10 in Philadelphia reported that at 6:01am ET Tuesday morning, Freeland-Gaither’s ATM card was used by a man at a PNC Bank in Aberdeen, Md., expanding the investigation to two states. The man seen at the ATM fits a similar description to the abductor, police say, but they’re not yet sure if he is the same person.

“We ask the public if anyone saw a vehicle matching this description in the area to contact Northwest Detectives,” Philadelphia Police Chief Inspector Dennis Wilson said, explaining that none of the witnesses at the scene were able to get the license plate number of the suspect’s car.

Philadelphia Police are working with Maryland State Police and the FBI to investigate the incident and believes the abduction to be random. Wilson explained that based on unreleased surveillance audio from the scene of the abduction in conjunction with the video, they have no reason to believe that the victim knew her kidnapper.

“Please give me back my child. Please give me my baby,” Carlesha’s mother Keisha Gaither pleaded to the kidnapper at a public press conference on Tuesday. “We’re not pressing no charges or anything like that, all we want back is our daughter. That’s all we’re asking for,” her father added.

Freeland-Gaither is a nurse’s aide who works with cancer patients at Penn Presbyterian Medical Center. She had been in the neighborhood visiting her godson before her abduction.

Anyone with information on the kidnapping can contact the Philadelphia Police at their tip line, 215-686-TIPS.