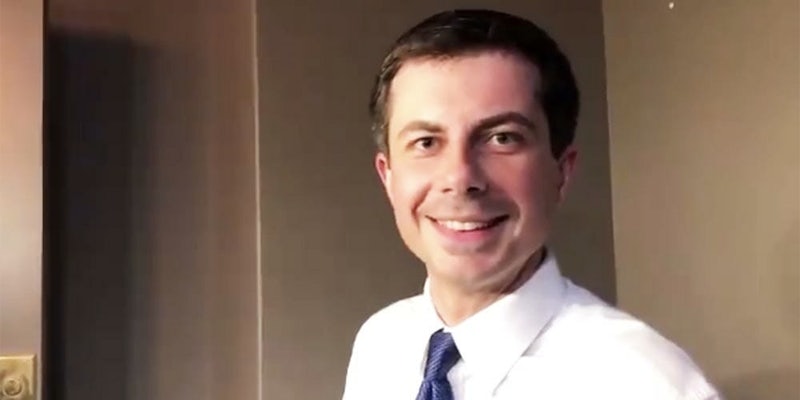 It is with heavy heart that we must notify you that President Donald Trump is up to his usual bag of tricks again. This time presidential candidate Pete Buttigieg is the lucky target. On Friday, POLITICO released a transcript of an interview with the president, in which he sounded off about everything from North Korea, to his looming possible impeachment, and of course, his competition in the 2020 election.

Trump admitted that he thinks former Vice President Joe Biden is the frontrunner of the Democratic hopefuls, but was then asked about the 37-year-old South Bend Mayor—who has a surprisingly dedicated movement behind his campaign.

The reporter queried Trump on whether he found Buttigieg to be a threat, pointing out that he had mentioned the mayor once at a rally. Trump’s response was abrupt, and as usual, didn’t offer much value to the conversation.

Buttigieg was later asked to respond to the president’s jab, and in doing so inadvertently dropped a metric shit-ton of shade.

Ouch! Mayor @Pete Buttigieg responds to ⁦@realDonaldTrump⁩ slam that he is “Alfred E Neuman” —“I had to Google that..I guess it’s a generational thing.” pic.twitter.com/ZL11noISYL

“So, I’ll be honest I had to Google that, I guess it’s a generational thing—I didn’t get the reference,” Pete countered. “It’s kind of funny I guess, but he’s also the president of the United States and I’m surprised he’s not spending more time trying to salvage this China deal.”

And that fact was not lost on Twitter, by those who rallied around Buttigieg’s stunning clap-back:

This is a nickname that might have worked better twenty years ago https://t.co/REqEmf9Mvg

And as someone else pointed out—given MAD‘s fixation on Trump—perhaps this nickname was an unwise choice:

Considering how often he’s been a @MADmagazine cover this is a classic self-own pic.twitter.com/3fUqWBWVsi

MAD Magazine, on the other hand, was less impressed with the candidate’s retort, tweeting: “Who’s Pete Buttigieg? Must be a generational thing.”

Who’s Pete Buttigieg? Must be a generational thing.

But age aside, is anyone really surprised that Pete Buttigieg is unfamiliar with MAD Magazine? Dude is a Rhodes scholar and concert pianist who allegedly speaks eight languages. Yet another hapless self-own from Trump.

the DC press corps when trump comes up with a new nickname for one of the 2020 dems pic.twitter.com/mkW5B5B0HF