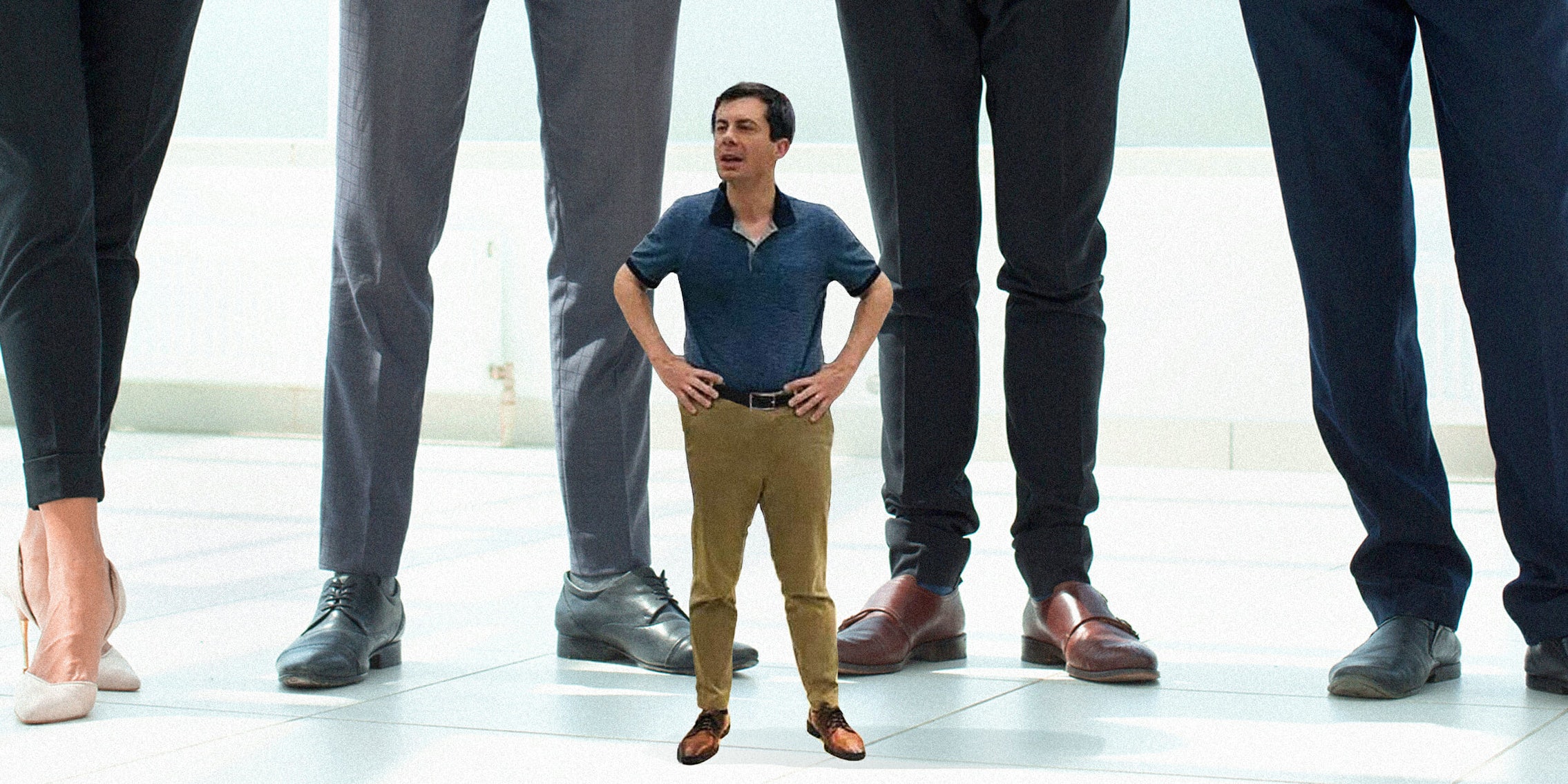 The other night, I came across the following photograph of Democratic presidential hopefuls Beto O’Rourke and Mayor Pete Buttigieg.

Either Beto is a towering giant or Mayor Pete is a small king. Or both. So I did what any good American would do and went to Google. There it… sort of was.

According to Wikipedia, which we have to assume is maintained by his campaign, O’Rourke is 6’4”.

But what about Buttigieg? Nothing comes up on Google, and the Wikipedia entry is shockingly empty.

And all other results are of questionable accuracy. CelebSiren.com lists Pete’s height as “not available.”

A few pages into the results, the super legitimate StarsUnfolded.com approximates Mayor Pete’s height at 5’8”. That site also pinned down Pete’s eye color at “Lavender Gray.”

More legitimate journalism hasn’t found the space to speak about his size.

What is Pete Buttigieg’s height?

Buttigieg is now President Joe Biden’s transportation secretary, having endorsed the president after dropping out before Super Tuesday. But when he was a hot Democratic ticket, articles tended to ignore it.

For instance, The Cut’s March 21, 2019 article “What to Know About Mayor Pete“ did not find his height something worth knowing, but did find this clip of Buttigieg’s husband, Chasten, playing youth basketball to be vital information for prospective voters. And this April Business Insider article titled “Who is Pete Buttigieg?“ also found the man’s size not worth noting.

Both the South Bend Mayor’s Office and Twitter-popular Chasten declined to comment.

When the Daily Dot spoke with the Buttigieg campaign after the first debate, they announce that he was 5’9″. That answer’s been used before. One intrepid high school student (or so this tweet claims) got an answer from Buttigieg’s campaign at 5’9”.

Buttigieg himself perhaps hinted at a below 5’11” height when he said actor Matt Damon could play him in a movie. Matt Damon is 5’10”.

Other 2020 presidential hopefuls have not been as shy about their status as a Short King, Medium King, Small Giant, or Towering Behemoth. In descending order, Sen. Corey Booker is 6’2”, Sen. Bernie Sanders is 6’0”, Vice President Joe Biden is 6’0”, Sen. Elizabeth Warren is 5’8”, and Sen. Kamala Harris is 5’2”.

Am I being petty? You’ve undoubtedly seen data that since 1900, the taller candidate has won the presidency 19 times compared to eight for the shorter candidate. The average height of United States presidents since 1900 has been 5’10”. The taller candidate also typically wins most televised debates.

Democrats (probably) need someone who is close to President Donald Trump’s 6’2” (or 6’3”, depending on which driver’s license he is showing that day.) If you’re wondering, Hillary Clinton is 5’7”.

It’s likely that Buttigieg HQ knows all of this and is working hard to obscure the fact that Mayor Pete is merely medium height (or shorter).

Thankfully, there are literally infinite ways to make short kings get in line with their scene partners. The most common are apple boxes, which is a fancy Hollywood name for a wooden box one stands on. There’s also Photoshop, limiting the background focus of passersby, or shooting the subject from below or above.

There’s also “the FDR,” where you only shoot them sitting in a chair. Worked for FDR!

The possibilities are limitless, as long as you prohibit your candidate from standing next to extremely tall people. Especially not 6’4” folks named Beto O’Rourke.

But the campaign isn’t perfect in keeping his height under wraps. Here’s Pete with Obama (6’1”).

Is Pete or his staff hiding his height at all? Height isn’t something one can change (yet), and it’s shitty that statistics tell us voters care about something so trivial, even if it’s subconsciously. But whether you care about candidate height or not, or think it’s a predictor or not, we’re all going to find out sooner or later.

Even at the debates, on a sky-high apple box, Buttigieg will have to step off of it and shake 6’2” Sen. Booker’s hand.

And while political height-shaming is nothing but body negativity and some Nate Silver statistical bullshit, maybe it’s a story the team should be getting in front of. Because they are missing the opportunity of a lifetime: to connect their millennial candidate to a meme.

Buttigieg, by presidential standards and this Urban Dictionary entry, is a true short king.

To quote writer Miles Klee, being a short king should be a point of pride.

“…a short king celebrates his height, always wearing it well. He’s never been envious of a six-foot-plus dude’s gawky frame, and he sure as hell doesn’t add inches to his own measurements to impress anyone. He won’t be contained by the stereotype of the short man as an angry little Napoleon, nor the insulting idea that he’s somehow not as masculine. For him, shortness is not a liability, but an advantage — it’s crisply elegant and efficient.”

We may not be a monarchy, but a short king could be president, in the non-monarchical sense of the word!

Short King Appreciation Day falls on the summer solstice (June 21 of this year), and I think it would be a perfect day for Buttigieg to make his debut as the Democrats mighty mite, a true Short King among men.