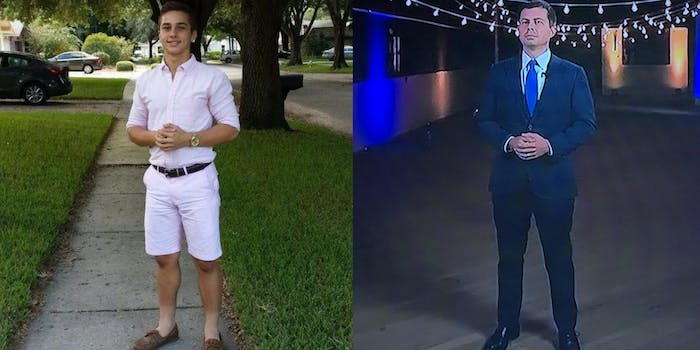 Pete Buttigieg revives classic ‘had to do it to em’ meme

As the Democratic National Convention’s digital events polished off Thursday night, Democrats highlighted their unity. The majority of Joe Biden’s former opponents for the presidential nomination gathered to support him.

One such speaker was Pete Buttigieg, former mayor of South Bend, Indiana. His impassioned speech aimed to pull former Buttigieg supporters to Biden’s side—but ended up paling in comparison to the memes his appearance inspired.

Memers can find inspiration in almost anything, but Buttigieg made their jobs particularly easy Thursday night. His pose in the first moments of his speech inspired a wave of memes nodding back to a template more than 6 years old.

All the way back in 2014, Twitter user @LuckyLuciano17k shared a photo of himself standing in a casual stance with his hands clasped in front. He captioned the photo “you know I had to do it to em.”

For several years, the picture was just a picture. It gradually racked up likes and shares, until one day someone decided to meme it. The image gradually became a staple of meme history, as @LuckyLuciano17k’s simple pose found its way into dozens of different formats.

Then, Thursday night, Buttigieg appeared in front of the world with his hands casually clasped in front of him. His pose was so similar to the years-old meme it seemed purposeful, and immediately inspired a wave of fresh, politically flavored memes.

Many of those who recognized the pose felt that Buttigieg had used it purposefully. He hasn’t said as much himself, but the idea has likely become canon in many web users’ minds.

By far the more widely recognizable of the Buttigieg-inspired memes actually happened in the hours before the former candidate took the stage. A picture of Buttigieg sitting hunched on a couch was too reminiscent of Eminem’s “Lose Yourself” music video for memers to pass up. Soon, Eminem-Buttigieg memes were taking over any discussion of the former nominee’s actual talking points.

The Republican National Convention is set to begin Monday.