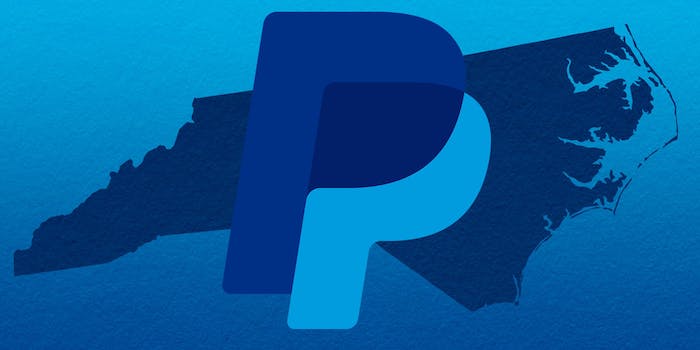 The contact was expected to create over 400 jobs in the Charlotte area.

Digital-payments giant PayPal has withdrawn plans to construct a new operations center in Charlotte, North Carolina, over the passage of a state law limiting the legal protections afforded LGBT individuals.

The new facility was expected to employ over 400 people with an average salary of up to $51,000 per year, the Charlotte Observer reports. Last Friday, the state’s investment committee gave its unanimous approval for $3.7 million in state incentives, including $480,000 in community college training.

But those skilled jobs and education opportunities are headed elsewhere now, to a state where Republican lawmakers have not stripped away the civil protections offered LGBT citizens, as is the case in North Carolina under the newly enacted Public Facilities Privacy and Security Act—formerly known as House Bill 2 (H.B. 2).

“The new law perpetuates discrimination, and it violates the values and principles that are at the core of PayPal’s mission and culture,” Dan Schulman, president and CEO of PayPal, said in statement released on Tuesday morning. “As a result, PayPal will not move forward with our planned expansion into Charlotte.”

Schulman went on to say that PayPal was compelled to take action due its strong belief “that every person has the right to be treated equally and with dignity and respect.”

“These principles of fairness, inclusion and equality are at the heart of everything we seek to achieve and stand for as a company,” said Schulman.

The Public Facilities Privacy and Security Act, proposed and passed in a special session of the Republican-controlled North Carolina General Assembly on March 23, and signed by Gov. Pat McCrory the same night, overrides local anti-discrimination laws, effectively preventing towns and cities from enacting extra protections for LGBT residents, women, and workers. The law came in response to a Charlotte law that allowed transgender residents to use bathrooms in accordance with their gender identities.

Specifically, the new law prohibits discrimination based on race, color, country of origin, religion, age, and what Republican legislators have termed, “biological sex.” The American Civil Liberties Union, meanwhile, has dubbed H.B. 2 the “most extreme anti-LGBT measure in the country.”

On March 28, the ACLU, Lambda Legal, and Equality North Carolina sued the state over the law.

Moreover, since the minimum wage for workers also falls under the state’s anti-discrimination law, local governments are no longer permitted to set their own minimum-wage standards.

Late last month, 90 prominent business leaders signed a letter to McCrory calling for the law’s full repeal. “Discrimination is wrong, and we believe it has no place in North Carolina or anywhere in our country,” it said. The signatories include the heads of Apple, Facebook, Twitter, Pfizer, Levi Strauss, among others. Bank of America, although not included in the original letter, has subsequently signed on as well.

A spokesperson for the governor’s office could not be reached by email or phone on Tuesday.