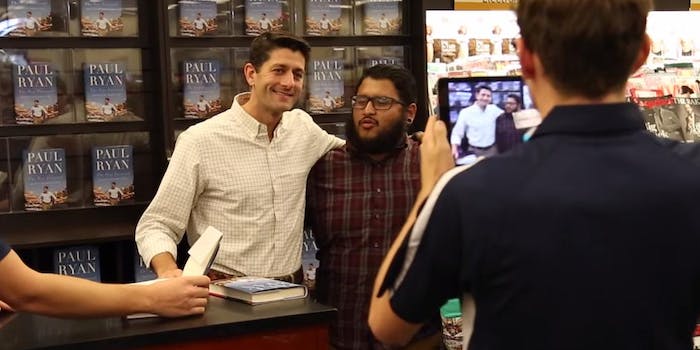 Yet another congressional Republican has suffered through a quick chat with undocumented immigrants.

Congressman Paul Ryan (R-Wis.) got some unexpected visitors at a book signing on Saturday from a group of young undocumented immigrants who are angry at Ryan for voting to end President Obama’s program giving them temporary shelter in the U.S.

The program, known as Deferred Action for Childhood Arrivals (DACA), gives federal immigration officials wide discretion over how to enforce immigration laws against people who entered the country illegally. That discretion has resulted in the federal government granting a reprieve to young migrants with no criminal record, known as “DREAMers” after the as-yet-unpassed DREAM Act which would grant them greater legal protection.

Ryan, the Republicans’ vice-presidential candidate in 2012, was one of 212 House Republicans who voted with four Democrats to end DACA on August 1. (The measure has no chance of passing the Democrat-controlled Senate, but Republican leaders in the House agreed to put it up for a vote in order to smooth the passage of another border security bill.)

On Saturday, at a bookstore in Florida, the DREAMers made their displeasure with Ryan known. The congressman was autographing copies of his book The Way Forward when a young man who had stepped up to have his copy signed asked about the DACA vote. The immigration activist group United We Dream recorded what happened next.

“It’s a constitutional issue,” Ryan tells the DREAMer as he drapes his arm around the young man for a picture.

“It would put me and my sister up for deportation,” the DREAMER responds as Ryan smiles for the camera.

“Do you want to deport me and my sister?” the young man asks again as one of Ryan’s aides attempts to escort him away from the line. A security guard eventually takes over the task.

The man’s sister also approaches Ryan and asks the same question, to which Ryan responds, “I want you to read the book.”