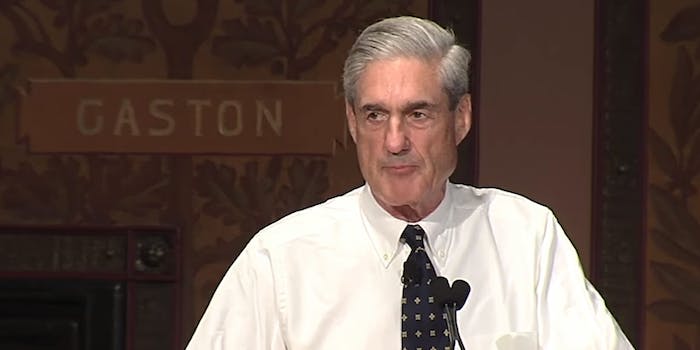 The subpoena goes back to just after Trump announced his candidacy for president.

The subpoena, which was reviewed by Axios and NBC News, asks for emails, texts, handwritten notes, and other forms of communication between the witness and:

The subpoena goes back to Nov. 1, 2015—just a few months after Trump launched his presidential campaign—and was sent to the witness a month ago, according to the news outlet. Mueller’s team is investigating Russian interference in the 2016 election, including possible ties between the country and the Trump campaign, and probing whether or not Trump obstructed justice.

Mueller’s investigation has seemingly intensified in recent weeks. Last month the special counsel’s office indicted 13 Russians and several companies connected to the Internet Research Agency, the Russian “troll farm” that posted content on social media to sow discord ahead of the 2016 election. Since then, Trump’s legal team has been reportedly weighing options for a possible interview between the president and the special counsel’s team.

After news of the subpoena was released on Sunday, Ned Price, a former CIA official who advised President Barack Obama’s administration, said it appeared as if Mueller was treating the Trump campaign like a “criminal enterprise.”

And several targets never took up a position in the White House, suggesting this particular subpoena isn’t about obstruction. The inclusion of Roger Stone, who had foreknowledge of the Podesta leaks, indicates this could be about potential collusion.

The special counsel’s office has already charged several members of Trump’s campaign as part of the probe. Manafort and Gates were first charged in late October, former foreign policy adviser George Papadopoulos, and former national security adviser Michael Flynn pleaded guilty to lying to the FBI and agreed to cooperate with the government as part of his plea agreement.

The president has repeatedly denied any “collusion” between his campaign and Russia.