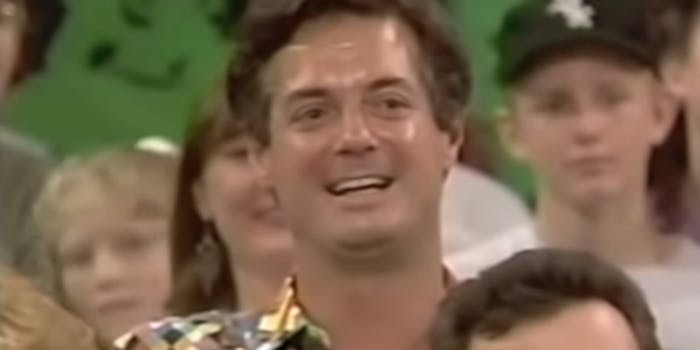 Well, this is weird.

Manafort was indicted in October 2017 as part of Special Counsel Robert Mueller’s probe.

Manafort’s wife, Kathleen, was once a contestant on What Would You Do?, a Nickelodeon game show that ran in the early 1990s. In the segment, host Marc Summers weighs Manafort’s wife’s purse.

The clip resurfaced on Twitter on Wednesday. In it, Summers takes Manafort’s wallet, takes a brief look at it, and asks: “how many American Express cards does one person need?”

“Lets count them together. One, two… oh wait a minute there’s three American Express cards: he’s got a gold, a platinum, and a corporate. He’s got nine Visas, and an AT&T credit card,” Summers continues.

A young Paul Manafort and his wife Kathleen on the ‘90s Nickelodeon game show “What Would You Do?” https://t.co/e7AU84baH9

Weirdest video of the day:

Paul Manafort and his wife, Kathleen, appeared on the 90s Nickelodeon show 'What Would You Do?'

During a segment for "heaviest purse," Marc Summers has Manafort's wallet and pulls out 3 AmEx cards, 9 VISA cards, and another credit card. (via Reddit) pic.twitter.com/J0M41YxbBA

At the end of the segment, Manafort’s wife lost the purse weighing contest, thus skipping getting a pie thrown at her face.

Manfort was convicted of bank fraud and tax fraud as part of Mueller’s probe. He has also pled not guilty in March to new felony charges of mortgage fraud and falsifying business records, according to HuffPost.

In his time lobbying for foreign governments, Manafort amassed over $50 million and lived in an extravagant lifestyle. When Manafort was on trial, it was revealed he once purchased a $15,000 ostrich coat, as the government tried to portray his dubious sources of income.

Perhaps Marc Summers was trying to warn us?