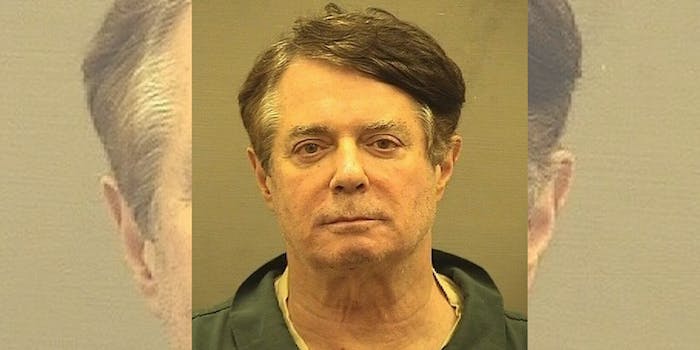 Paul Manafort, the former campaign chairman for President Donald Trump, was transferred to a detention center in Alexandria, Virginia on Thursday–which resulted in his mugshot being released.

It was immediately mocked.

Manafort, who was charged as part of Special Counsel Robert Mueller‘s ongoing probe into Russian interference in the 2016 election and other related matters, was moved to Alexandria, Virginia, just days after his lawyers argued that he was being held in solitary confinement for 23 hours a day, hurting his ability to prepare a defense for himself.

The former campaign manager was held at the Northern Neck Regional Jail previously, according to Politico.

As part of the move to the jail in Virginia, his mugshot was released—resulting in many, many, many jokes from people online.

me at the beginning of 2018 vs. me halfway through pic.twitter.com/a8vPvaNIk5

Would you trust this man with picking your Vice President? #ManafortMugshot pic.twitter.com/jev9R1kmPJ

Half the bars in Queens have a photo uncannily similar to this on the wall with "Do Not Accept Personal Checks From" written underneath. https://t.co/nJQkoofNTk

He looks like he's slowly morphing into Steve Bannon https://t.co/H1r2fr38ej

Other people brought up the mugshot of Stormy Daniels, the adult film actress who says she had an affair with Trump, who was arrested on Wednesday at a strip club in Columbus, Ohio. Her lawyer, Michael Avenatti, said that the arrest was “politically motivated.”

If you then
don't you dont
love me deserve me
at my at my pic.twitter.com/4mmUpPRmTI

Of course, there were others who took the mugshot as a way to meme their way into defending Manafort.

The former Trump campaign chairman was charged with money laundering and other crimes late last year as part of Mueller’s probe.