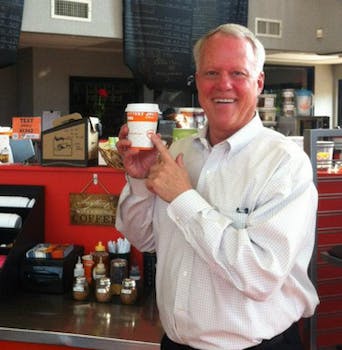 Dr. Paul Broun has promised to make all of his decisions in Washington based on the Bible.

Dr. Paul Broun is one American congressman who does not believe in the separation of church and state.

In fact, the Georgia congressman pretty much only believes in the meaty details detailed in the Bible. And for the next two years, at least, he plans to make his decisions in Washington based on that holy book—even if it discards such logic as “evolution, embryology, the Big Bang Theory,” and all those “lies straight from the pit of Hell.”

Speaking to Liberty Baptist Church congregants at the 2012 Sportsman’s Banquet on Sept. 27, Broun, a Republican (surprise!) and practicing physician, opened up a 24 oz. can of crazy, testifying on behalf of the Bible and declaring that he believes the Earth is really only 9,000 years old.

“And that’s the reason as your congressman I hold the Holy Bible as being the major directions to me of how I vote in Washington D.C., and I’ll continue to do that.”

This isn’t the first time that Broun has preached from the depths of the deep end. In 2009, he campaigned like mad to make 2010 “The Year of the Bible,” In April, he declared President Obama to be “a Marxist” who is “destroying everything that made this country great.” He is, unsurprisingly, “an avid hunter and sportsman” who believes in the American people’s right to bear arms, and he’s about as pro life as they come.

So voter registration deadlines are Tuesday in 18 of this country’s 50 states—including Georgia! Get on out there, alright?