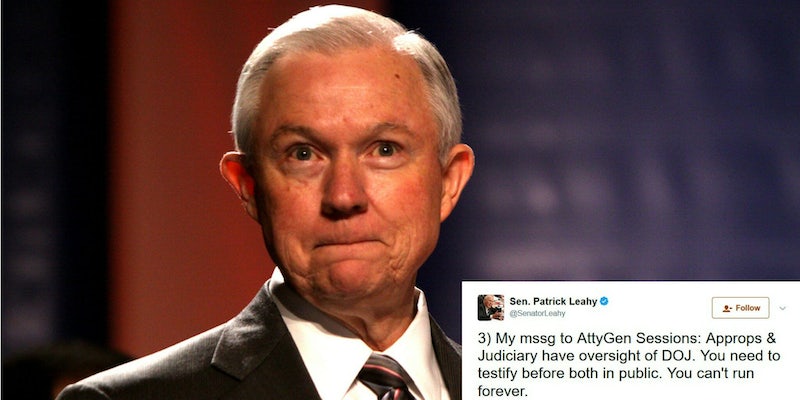 Attorney General Jeff Sessions is wanted for questioning by some Democratic senators to discuss more potential undisclosed meetings with Russian officials and whether he committed perjury during his confirmation hearing in January.

On Saturday, Sessions said he would appear before the Senate intelligence committee on Tuesday in order to answer questions about fired FBI director James Comey (it’s not clear whether this will be conducted in public), but Sen. Patrick Leahy (D-Vt.) is upset that Sessions has canceled his plans to testify in front of the appropriations committee and, therefore, be subjected to questions by Leahy.

Leahy took to Twitter on Saturday night and Sunday morning to inform Sessions that he can’t run forever.

Atty Gen. Sessions provided false testimony in response to questions from me and @SenFranken about his contacts with Russian officials. (1)

(2) Now, twice in 2 mos., AG Sessions cancels an Approps hg in which I could Q him about his false testimony and half-hearted Russia recusal

3) My mssg to AttyGen Sessions: Approps & Judiciary have oversight of DOJ. You need to testify before both in public. You can't run forever.

Instead of Sessions, Deputy Attorney General Rod Rosenstein will testify in front of the appropriations committee Tuesday.

In a letter sent Saturday, Sessions wrote, “Some members have publicly stated their intention to focus their questions on issues related to the investigation into Russian interference in the 2016 election, from which I have recused, and for which the deputy attorney general appointed a special counsel. In light of reports regarding Mr. Comey’s recent testimony before the Senate Select Committee on Intelligence, it is important that I have an opportunity to address these matters in the appropriate forum. The Senate intelligence committee is the most appropriate forum for such matters, as it has been conducting an investigation and has access to relevant, classified information.”

Sessions recused himself from the Russian investigation in March.