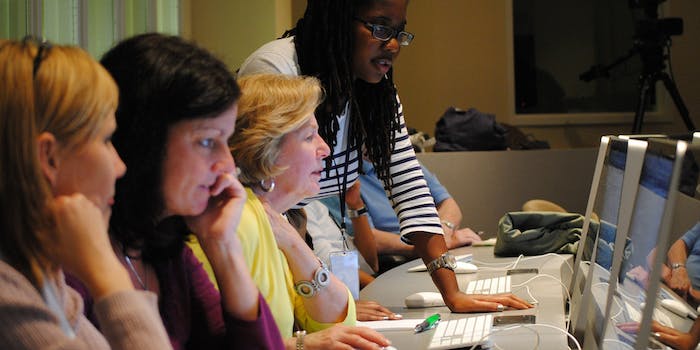 5 facts about your mom and social media

A new survey from the Pew Research Center contains some surprising findings about parents’ use of the Internet. While young people tend to think of their parents as low-tech squares, Pew’s findings suggest that that’s not entirely true.

Here are five facts about your mom—if she’s representative of Pew’s findings—that you might find interesting.

Pew found that 75 percent of parents use social media. That’s right—your mom’s probably on Twitter. Sure, she might have joined the social network to monitor you, but she’s also using it for herself. To wit…

2) She’s getting support from her friends

3) She actually responds to questions online

That’s right. Your mom presumes that if you ask a question, you’re not being a wise guy—you actually need the answer. Pew found that 71 percent of parents on social media try to respond if they know the answer to a question posed by someone in their online network. The percentages are roughly the same for moms and dads.

Parents share photos of their kids like there’s nothing else on the Internet. They are most definitely not on social media to lurk. Pew found that 94 percent of parents on Facebook share posts, links, and pictures there. Nearly all parents on Facebook are connected to their real-life friends (88 percent) and to family members (93 percent).

If Pew’s findings tell us anything, it’s that, in many ways, parents are just like us: keen on using social media to keep up with friends, share funny photos, and discuss whatever’s happening in the world in 140 characters or less.

So the next time you have dinner with your parents, ask your mom for her Twitter username. You never call and you never write—a tweet is the least you can do.

Photo via knightfoundation/Flickr (CC BY SA 2.0)