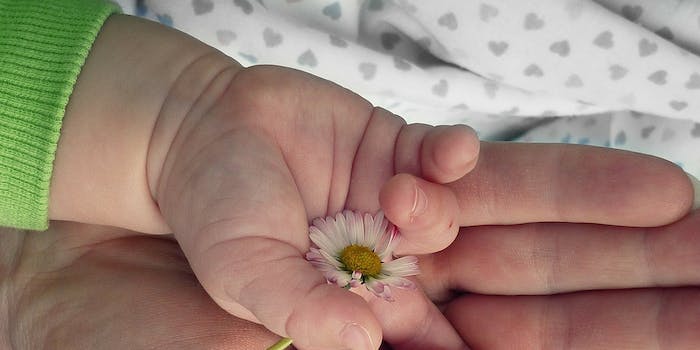 The stress of raising kids is the target of a new app.

Computer scientists at Microsoft Research and the University of California at San Diego are trying to make parenting a little less stressful by creating an app to help parents cope with the challenges of child-rearing. The app, called ParentGuardian, uses a sensor worn around the wrist to measure stress levels for moms and dads. The app dings to alert parents when necessary, and offers coping mechanisms such as instructing parents to take deep breaths, or reminding them that they are their child’s role model.

It creates a stress monitor by measuring the electrical conductivity of parents’ skin. I know, that sounds made-up. But it had a 78 percent accuracy rate during the first test, conducted with a group of parents whose children have ADHD. Parents wore the wrist sensors until they were “trained” to correctly gauge when their sweat secretions indicated intense emotions.

The test-group of parents liked the app. “It made me aware of that I need to handle my stress differently. It made me aware of exactly which steps I’m taking to get me to be really stressed out, so it’s like self-awareness. If you’re stressed and you’re screaming at people, you don’t understand what’s going on. You don’t have time to understand what’s going on, but if you’re aware of the fact that you’re stressed and first time it dings at you, you’re like, “Oh, okay, I got it,” and the next time, like a couple times, you’re almost anticipating it to happen,” one parent said.

While all of the advice given is extremely straightforward and pretty obvious, but sometimes that’s just what people need to hear. There’s never going to be an app that tells you how to be a good parent or a good worker, or an app that can relieve the stresses that come from being an adult with responsibilities. What ParentGuardian offers is basically affirmations and reminders to be thoughtful. The way it offers these tips is the progressive part; the app shows how mood monitoring can be done relatively inobtrusively. It’d be interesting to see how an app like this would do if developed for a larger demographic, or even just pinpointed more subgroups. Instead of parents, there could be one aimed at people with stressful jobs, with a set of tips for keeping perspective or taking breaks. Or maybe one for writers that reminded them to go outside at least once a day. Just spitballing here.