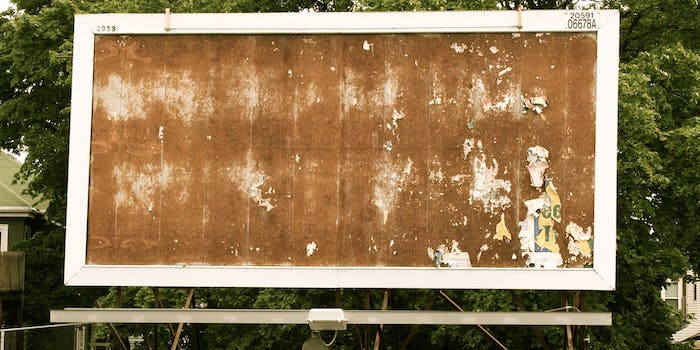 Because thinly veiled racial stereotypes are just the thing to ease community tensions.

A campaign to crowdfund a racist, pro-law enforcement billboard has become a runaway success in Ferguson, Mo., further escalating tensions as the city awaits a grand-jury verdict.

In August, Ferguson police officer Darren Wilson shot and killed Michael Brown, an unarmed black teenager, in a contested sequence of events. In the months that have followed, the St. Louis suburb has played host to frequent—and at times violent—protests, characterized by chants like “Hands up, don’t shoot,” a reference to the widely supported claim that Brown was surrendering when he was shot. (Wilson contests this narrative.)

A grand jury is currently deliberating over whether to indict Wilson for the fatal shooting, and Missouri Governor Jax Nixon has declared a state of emergency so that the Missouri National Guard can deploy to contain any post-verdict rioting. But confusion over what took place on that day in Ferguson hasn’t dissuaded some Darren Wilson supporters from rushing to the controversial cop’s defense.

On Oct. 28, Tennessee resident Don Alexander launched a fundraising campaign on the crowdfunding site Indiegogo to fund a billboard near the site of Brown’s death with the hashtag #PantsUPdontLOOT.

To avoid generating negative press for the billboard company, Alexander has declined to identify it, according to Raw Story. This hasn’t stopped the campaign from breezing past its fundraising goals. Alexander initially asked for for $3,000. At press time, he had raised approximately $31,121. The campaign still has a month left before it closes.

Alexander has said that any surplus funds will go toward keeping the billboard up as long as possible. One month will cost around $2,500. “If we come to an agreement with a company,” Alexander said, “and can fund it for 3 months, 5 months, 7 months…, we will.”

Unlike the unnamed billboard company, the Indiegogo campaign is revelling in the press attention that the billboard has received, posting numerous screen grabs of articles on its website. It captioned a screenshot of Gawker’s article with the words “you asked for this.”