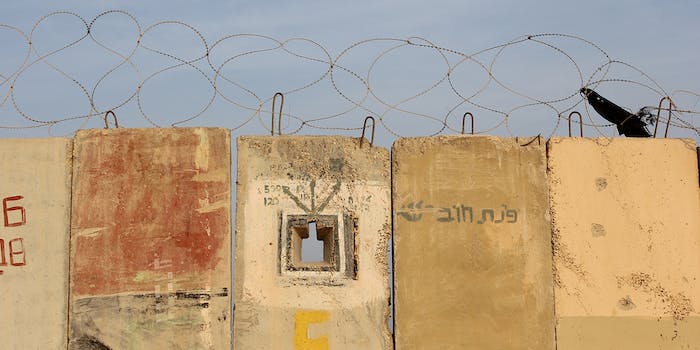 But an International Criminal Court investigation could be complicated for all sides.

After a month of intense fighting between the Israeli Defense Force (IDF) and Hamas, the Palestinian Authority (PA) has reportedly decided to join the International Criminal Court (ICC) and file suit against Israel, alleging war crimes in Gaza.

The move follows months of pressure from human rights organizations and an online campaign that sparked millions of tweets.

While an official complaint was filed by an attorney with the court last week on behalf of the Palestinian Justice Minister Saleem al-Saqqa and Ismail Jabr, the Gaza court public prosecutor, it was unclear what steps, if any, the ICC could take without jurisdiction over the Gaza Strip and West Bank.

In order to confer jurisdiction to the ICC, the Palestinian government must file a writ of accession with the secretary general of the United Nations (U.N.) and become a party to the Rome Statute, an international treaty that established the court. On Wednesday, the PA indicated it was finally prepared to ratify the treaty.

After the U.N. granted Palestine “non-member observer state” status in 2012, President Mahmoud Abbas offered assurances that his government would not seek to join the ICC. Pressure to join the court has heightened over the past month, however, with the deaths of over 1,600 Palestinians in Gaza. At least 30 percent of the casualties so far have been children, according to UNICEF.

On Thursday, Abbas asked various Palestinian factions to provide written consent to join the ICC. He was waiting for Hamas and the smaller Gaza-based Islamic Jihad to respond, according to the Associated Press. Citing sources in the West Bank, the Times of Israel (who published, then deleted, an op-ed on Friday titled: “When Genocide Is Permissible”) reported that the PA had made the decision to move forward and ratify the Rome Statute.

This year, several online campaigns have been launched urging Abbas to join the ICC. In May, 17 human rights organizations, including Human Rights Watch and Amnesty International, published an open letter calling for PA to join the ICC. On Twitter, the hashtag #ICC4Israel remains highly active. It peaked on July 26 with over 600k tweets, trending worldwide.

Why does Israel’s ‘right to self-defense’ give it carte blanche to bomb hospitals, kill hundreds of kids & commit war crimes? #ICC4Israel

Just noticed #ICC4Israel is a trending topic worldwide! I guess that’s what happens when you proudly commit war crimes with impunity.

Social media has been used for more than just casting accusations. It’s also documented heartbreaking incidents in which unarmed civilians are have been killed by soldiers.

In a widely distributed video, Salem Shammaly, a 23-year-old Palestinian is seen being killed by a sniper while searching through the rubble for his family. The incident was captured by fellow members of his search party and uploaded to YouTube.

Joe Catron, an American activist in Gaza, tweeted the last photograph taken of Shammaly (green shirt) before he was killed:

If I were going to choose one photo I’ve taken to be seen around the world, this would not have been the one. #Gaza pic.twitter.com/25iQ43zb6P

Raw footage of IDF snipers killing an unarmed Salem Shammaly (Warning: This video depicts explicit images of warfare that will upset some viewers):

After an Israeli airstrike hit an elementary school in Beit Hanoun, which housed some 800 Palestinian refugees—mostly women and children—the United Nations Human Rights Council (UNHRC) voted in favor of an investigation into the humanitarian and human rights violations taking place in Gaza. The only nation to oppose the resolution was the United States.

At least six U.N. workers have been killed since the start of the conflict. Dr. Bashir Ibrahim al-Hajjar, an Assistant Professor at University of Gaza, and his brother were among the casualties of an IDF strike on a U.N. vehicle Tuesday.

“There seems to be a strong possibility that international law has been violated, in a manner that could amount to war crimes,” said Navi Pillay, the U.N.’s top human rights official, at an emergency UNHRC debate.

Since the start of the ground operations in Gaza, Israeli officials have adamantly denied that Palestinian civilians are being targeted. “Hamas is responsible for the death of civilians,” Prime Minister Benjamin Netanyahu told NBC’s David Gregory on last Sunday’s Meet The Press.

Luis Moreno-Ocampo, a former ICC prosecutor who rejected Palestine’s 2009 attempt to join the ICC, said that since their statehood was no longer in question, the PA should be eligible to join the court. “In the past, the Palestinians asked to join the International Criminal Court, but I had no authority to determine whether they are, in fact, a state. Today they are recognized and can choose to turn to the court,” he told Al-Monitor.

Joining the ICC may provide a recourse for reporting Israeli war crimes in Gaza or the West Bank. But as Moreno-Ocampo warned, signing the treaty could also lead to an investigation of Hamas and the storage of rockets near schools and hospitals.

Palestinian supporters may also be disappointed to learn that, since the court has no authority to define the borders of a state, Israeli settlements in the West Bank, while considered an illegal occupation by an overwhelming majority of the world’s governments, would not fall under the court’s purview.