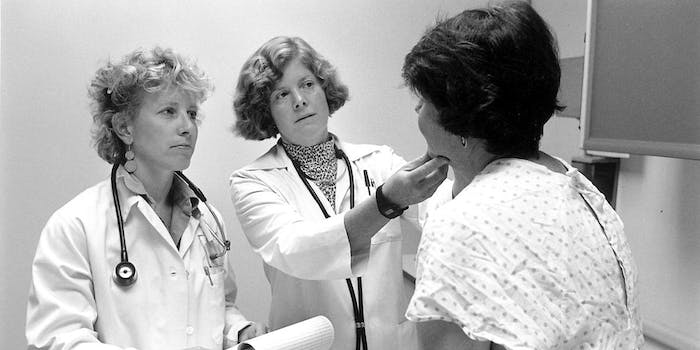 The Uber for doctors will send medical help straight to you

Getting sick sucks. When you’re huddled up under the blankets, simultaneously freezing and sweating and coughing, dehydrated even though liquids are leaking from all the wrong places, the last thing you want to do is put on clothes and venture outside. But to see a doctor, it’s usually necessary. In big cities, getting a bedside visit from your family doctor is something you see on reruns of Dr. Quinn Medicine Woman, not real life.

Pager lets sick users pick which doctor they want to call based on who appears near them. The app shows the available doctors in the area, with profiles showing their specialties, fees, and credentials.

A phone consultation will run users $50, with $40 going to the doctors. That kind of consultation isn’t exactly new for telemedicine and doctor apps; other services offer on-demand doctor phone consultations. What is more novel is the at-home option. For $300, the doctor will come right into the user’s home and give them an appointment. They can also call in prescriptions and provide users with the correct insurance forms through the app.

This is not a cheap service, but the convenience factor will be immensely appealing to the same group of people who have no problem regularly shelling out for Uber cars. It’s only going to appeal to a certain income bracket, and if people have enough money to throw down $300 to avoid traveling to a doctor’s office, they may already choose to pay extra for house calls anyways. And the Wall Street Journal reports that like Uber, Pager may have surge charges, sure to aggravate people in the throes of a flu during the peak season.

Pager will be a boon to doctors looking to pick up extra cash, and it will provide people who can afford it a very convenient way to overcome a case of bronchitis. Due to the prices, however, it’s likely to be a niche service. That doesn’t mean it’s devoid of implications for sufferers of the common cold without tons of disposable income. Apps like Pager show how people are applying the Uber model to other markets. It’s a cliche now to refer to something as “The Uber of x,” but that doesn’t mean the description won’t continue to be true for an increasing number of start-ups.