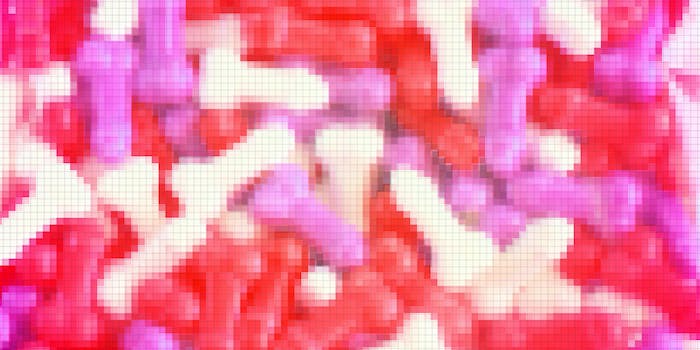 Their request for 'snacks' came with a bonus surprise.

Nuzzled deep within the infinite rainbow of ways to tell a person you disapprove of their life choices sits a singular option that speaks volumes above all others.

We’re talking, of course, about sending that person a bag of dicks.

Such is the insult borne by Jon Ritzheimer, organizer of the militia that continues to occupy a federal building at an Oregon bird sanctuary in protest of the U.S. government.

“It’s sad that there are people who would spend this kind of money on this rather than spending it to do good in the world,” writes Ritzheimer in the Facebook post. “I’m done living in fear of an oppressing force. I’m going to uphold my oath to the Constitution and sleep great at night knowing that I did everything in my power to ensure what our founding fathers did for us will not be lost.”

The package of hate mail comes after Ritzheimer asked supporters to send “cold weather socks, snacks, energy drinks, equipment for cold weather, snow camo, gear” in a Facebook post published soon after the group took over the wildlife preserve on Jan. 2. In response to this request, PETA delivered bundles of vegan jerky and other animal-free treats to the militiamen.

The group’s occupation revolves around the impending imprisonment of two ranchers, Steven Hammond and his father, Dwight Hammond, who were convicted of arson in 2012 after setting unlicensed brush fires on federal land. They were each sentenced to five years in prison in early October.

They also oppose the U.S. government’s placement of fences on the land, where they want to graze cattle. Earlier this week, they tore down fences on the federal land.

The fun and games on both sides of the hate mail may soon be coming to an end, however, as the militants are planning to announce an exit strategy from the Malheur National Wildlife Refuge on Friday, reports the Oregonian. The decision to vacate the bird sanctuary follows a suggestion by an Oregon judge that Harney County charge the militiamen $75,000 per day for costs to the community.

So, if you plan to send the armed militants a care package, you might want to go with overnight shipping.