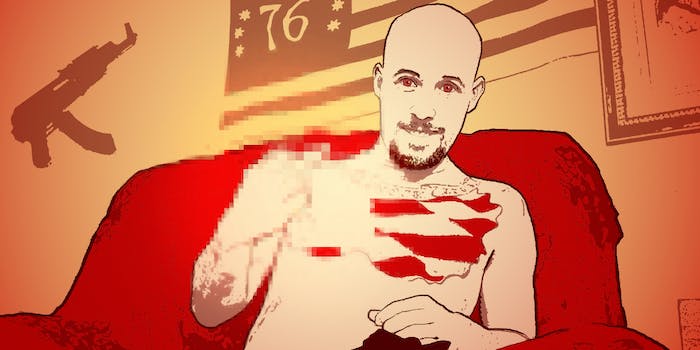 Meet the Trump-loving, Muslim-hating militant of the armed occupation in Oregon

The FBI already had its eyes on one of Oregon's militant occupiers.

One of the more than dozen armed militants illegally occupying a federal building in Oregon was recently on the FBI’s radar for threatening Muslims in a YouTube video.

Jon Ritzheimer, a 32-year-old former U.S. Marine and infamous anti-Muslim protester, called for supporters to join him at the remote Malheur National Wildlife Refuge in eastern Oregon in a video released on Monday. “Armed or unarmed, you get up here,” Ritzheimer said. “We don’t want bloodshed.”

“It’s amazing he hasn’t been arrested before now based on the things he’s said and done online.”

The U.S. Park Service has reportedly cut power to the facility, exposing the armed anti-government protesters to freezing temperatures. The militants have vowed to remain for “as long as it takes” in protest over the treatment of two local cattle ranchers.

“We need you to get up here and stand with us,” Ritzheimer says in the video, reportedly filmed outside the refuge’s entrance. His partner, fellow militia member Blaine Cooper, adds: “We need your help, guys.”

Less than a month ago, both Ritzheimer and Cooper attended a Donald Trump rally in Mesa, Arizona, where they confronted anti-Trump protesters on camera. “I am a Trump supporter,” Ritzheimer bellowed into a microphone outside the rally. “All the Trump supporters, before you leave, please come over here and thank these Muslims for not blowing us up.”

In late November, the Federal Bureau of Investigation contacted New York law enforcement after Ritzheimer, who is from Phoenix, posted another video online in which he waves a handgun in the air while making profane statements about President Barack Obama and Muslims.

“Fuck you, Muslims,” Ritzheimer says in the video. He promises to flip off “virtually every mosque” on his way to New York, and tell them to “get fucked.”

The video was deleted in less than a day, just not before catching the attention of the FBI, which in turn notified state and local agencies that Ritzheimer intended to confront Muslims at an upstate New York mosque, and that he might have been planning to commit a hate crime.

A month earlier, Ritzheimer had sought—but failed—to organize a series of armed protests outside mosques nationwide, something he’d become notorious for in Phoenix. 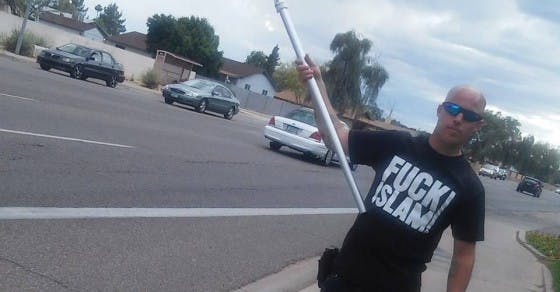 Jon Ritzheimer at an anti-Muslim protest in Phoenix, Az.

“We’ve been dealing with this guy for some time,” said Ibrahim Hooper, communications director at the Council on American Islamic Relations (CAIR). “He’s the person we’re concerned about.”

CAIR has reported Ritzheimer and his associates to law enforcement in the past, Hooper told the Daily Dot. “If you follow their social media, violence is implicit in everything they say, whether it’s their videos, shooting up the Quran with assault weapons,” he said. “It’s clear there’s a threat of violence when you take these things in context.”

“It’s amazing he hasn’t been arrested before now based on the things he’s said and done online,” added Hooper, who said Ritzheimer’s presence in Oregon is a clear indication there’s a racist element to the armed occupation.

In a statement released on Monday, Ritzheimer assured his audience there was “nothing illegal” going on at the wildlife refuge, though the protesters have refused to leave the federal building, which they broke into, until the U.S. government privatizes several thousand acres of public land.

“This land belongs to ‘we the people,’” Ritzheimer said. “It’s outlined right here in the Constitution.”