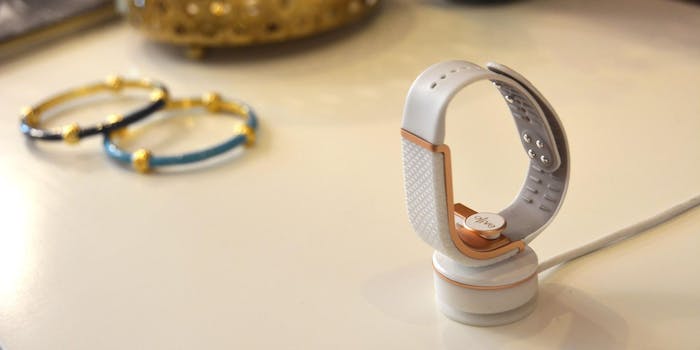 Olive is the wearable for managing your stress

If you ask someone how they’re doing, the answer almost always seems the same: “Stressed.” A new piece of wearable tech wants to help us fix that.

Olive is a bracelet equipped with sensors made to track different biological indicators of stress. The sleek device, currently available in black and white, then transmits the data to an accompanying app where users can monitor their stress levels.

“As each of us grew older and experienced more milestones in life, we found that we were left with less time, more responsibility, and more stress that impacted the quality of our day-to-day life,” Hiro Ellis, CEO of Olive, told the Daily Dot in an email.

The Olive team launched an Indiegogo campaign last week that has already garnered almost $85,000 of their $100,000 goal.

Some of the indicators the sensors measure include heart rate and heart rate variability, skin temperature, and even the amount of ambient light. Those indicators, as well as motion and skin conductors, offer clues about a person’s stress level. When the bracelet senses high stress levels, it will notify the wearer through a flashing light, vibration, or both.

From there, the bracelet will guide the user through breathing patterns and other exercises to reduce stress. Those with access to the app will be able to choose from different exercises developed in partnership with physicians, researchers, and psychologists that aim to improve stress management.

“For example, the gratitude exercises are inspired by what we learned from experts at Penn’s Center for Positive Psychology,” Ellis said. “Gratitude is shown to amplify positive emotions that can attenuate negative thoughts and buffer against stress.” The practice also increases immune function and leads to a better sleep, he added.

Olive works with or without a smartphone, though access to the app gives you more stress-reducing exercises and analysis based on factors already measured through the bracelet.

The more a user wears Olive, the more accurately the device can track stress.

And while the sensors work constantly track aspects of our health, users can also provide their own feedback to the bracelet. By tapping Olive twice during a moment when your spirits are high, the software takes a snapshot of that moment and assesses what your day was like leading up to that moment. When you’re feeling stressed, rubbing the bracelet will launch an exercise to help you through that situation.

For better or for worse, wearables have begun to permeate the tech market with proclamations that they can help enrich daily life. Fitness-based ones track daily movement while others want to turn users into portable chargers. By zeroing in on stress, however, Olive is trying to tackle something that we all deal with.

“We knew that being able to manage the mounting stress in life was more than just physical fitness,” Ellis said.

A survey conducted earlier this year by NPR, the Robert Wood Johnson Foundation, and the Harvard School of Public Health revealed that 49 percent of people went through a major stressful event or experience in the past year. More than half of those surveyed cited “too many responsibilities overall” as the reason that they felt stressed. Meanwhile, the American Psychological Association cited in 2012 that over 80 percent of people felt their stress levels had increased within the past five years.

Ellis and his team believe the device could help multitudes of people, especially in workplace environments that have employer wellness programs, saying Olive could create engagement and productivity among workers.

The Olive crowdfunding campaign will end on Nov. 9. The funds raised will further aid in the engineering manufacturing processes while additional funds beyond the original goal will allow the team to further research tactics to deal with stress.The device is still in development and testing, but a timeline on the fundraising page says that production will begin in summer 2015.