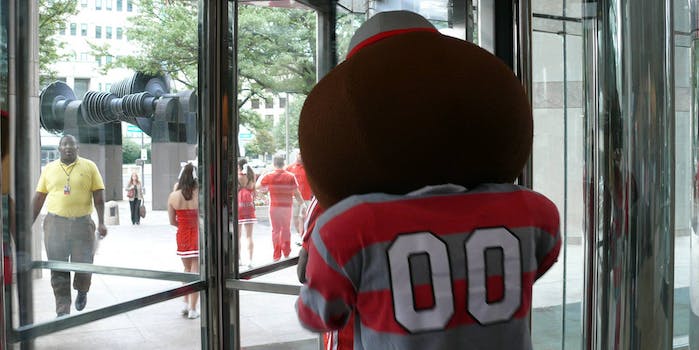 Details regarding the attack are still forthcoming.

At least nine people have reportedly been injured during a knife attack at Ohio State University in Columbus, Ohio.

The incident was originally reported as an active shooter situation.

Police confirmed to a local NBC News affiliate that one suspect is dead. Law enforcement authorities said the suspect drove a car into a crowd then began to cut people with a butcher knife. A police officer shot the suspect after arriving on the scene within minutes after the attack began.

One of the nine victims is said to have critical injuries. All victims were transported to local hospitals for treatment.

OSU’s emergency alert system sent texts and tweets to students at approximately 10am ET on Monday morning, telling them, “Run Hide Fight.” The incident occurred in Watts Hall, a science and engineering building.

“Run, hide, fight” is a common strategy, promoted by security professionals, for how to handle a mass shooting scenario and should be used as a checklist for how to react when confronted by an active shooter. The first option should be to run if you can. If that’s not a safe option, you should hide. With no other options available, fight.

The university has asked the OSU community to take shelter and avoid calling police unless they have new information.

Buckeye Alert: Continue to shelter in place. Wait for Police officers directions. Please contact Police / 9-1-1 only if you have information

The FBI is reportedly aiding in the investigation along with Columbus and OSU police.

OSU has approximately 60,000 students, making it one of the largest universities in the U.S.

Update 11:15am ET, Nov. 28: A ninth person is reportedly being treated for injuries, though it has not been confirmed. Police say a suspect is dead.

Update 11:38am ET, Nov. 28: OSU’s shelter in place order has now been lifted and the scene has been secured. Classes have been canceled.

UPDATE 1/2 : Shelter in Place lifted. Scene is now secure. ALL classes are canceled on Columbus campus for the remainder of the day.

Update 11:45am ET, Nov. 28: None of those injured have life-threatening injuries, according to hospital spokespeople.

Update 1:05pm ET, Nov. 28: Police say the suspect drove a car into a crowd and attacked people with a butcher knife.

Update 3:03pm ET, Nov. 28: According to NBC News, the suspect has been identified as Abdul Razak Ali Artan, a Somali immigrant, who allegedly posted a Facebook “declaration.”

Sources: Authorities believe they have ID'd suspect in #OSU attack as Somali immigrant and found a "declaration" posted on Facebook… (1/2)

Update 6:46pm ET, Nov. 28: The officer who shot and killed Ali Artan has been identified by school officials as Alan Horujko. The 28-year-old has been with the Ohio State campus police for almost two decades, according to Fox News.