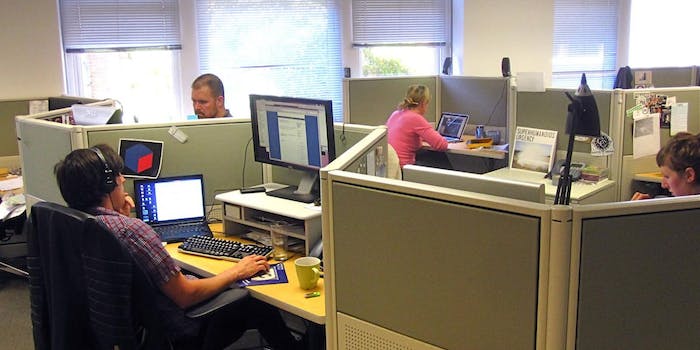 The air in your office is making you dumber

Get out while you can.

While scientists and world leaders recently gathered in Paris to figure out how to combat climate change and ensure our planet continues to support life, you’re likely reading this in your own, personal environmental hazard. If you work in an office, the air you’re breathing may very well be making you worse at your job.

According to a recent study published in Environmental Health Perspectives, scientists at Harvard and Syracuse found that CO2 levels in many office buildings are high enough to be detrimental to human health.

The research team created a simulated office space and filled it with 24 professionals who worked eight-hour days inside the mock workplace. Researchers modified the levels of CO2 being pumped into the room each day, creating an environment with varying levels of air quality to see if it had any impact on the work being completed. Researchers administered a 90-minute cognitive assessment each day to test the effects of the modified CO2 levels.

What they found was considerable evidence supporting the theory that less CO2 makes for cleaner air and a clearer thought process. Low CO2 days produced the best results, when levels sat at about 550 ppm—comparable to what a person would breathe in outside. When the CO2 level jumped up to 945 ppm—about what one would experience in the average office building—scores were 15 percent worse. Furthermore, when they cranked the CO2 level up to 1,400 ppm, a level found in buildings with poor ventilation or a denser worker population, and the cognitive function drops by 50 percent.

The findings of the study—which was led by Joseph G. Allen, an assistant professor at the Harvard T.H. Chan School of Public Health—are contrary to the commonly held notion that CO2 levels in buildings have no adverse effects on people. The Occupational Safety and Health Administration (OSHA) has set a permissible exposure limit for CO2 of 5,000 ppm over an eight-hour work day.

These results present an obstacle for environments designed to house many people conducting their work. Offices may not be getting the most out of their employees and schools may be stifling the critical thinking capabilities of students without even realizing it, all because of insufficient ventilation.

Making the issue especially difficult to remedy with expediency is the fact that much of the problem stems from the structure of the buildings themselves. Ventilation rates decreased during the 1980’s, resulting in office spaces that require significant changes to become more efficient.

There’s bad news looming for all buildings, equipped with green technology and not: climate change. As CO2 levels rise for the outdoors, keeping the concentration levels low indoors will become even more of a challenge.

On the positive side, if ever there was motivation for companies and corporations to start taking climate change more seriously, this may be it. Workers are being less productive and, therefore, less profitable. Want to make more money? Start by taking care of the environment.