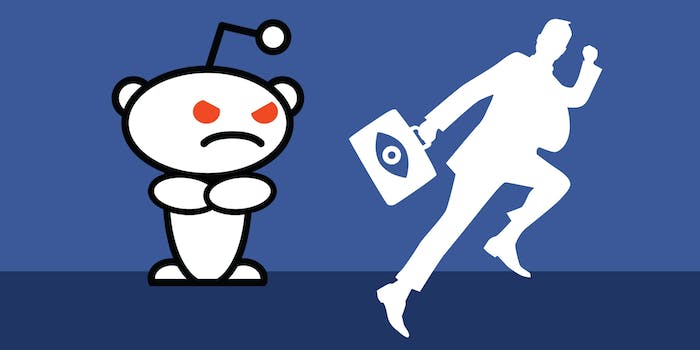 The news took most everyone by surprise—everyone but the r/oculus community.

It’s a virtual reality that Facebook has its haters; most companies of great size and prominence do. This was made clear on Tuesday, when the company announced it had purchased Oculus, maker of the Oculus Rift augmented-reality headset, for $2 billion.

Posters to the subreddit r/Oculus were particularly disdainful when learning of the acquisition. Here’s one way to quantify this anger: In less than an hour, redditors dropped more than 100 F-bombs in roughly 600 comments discussing the news.

Here’s a small sampling of the vitriol:

“So all of the hype and quality Oculus has fed us over the last year was bullshit to build up a fucking acquisition?”

“Suddenly I dont want a rift anymore. There is no way in hell I can trust FB with anything. They dont respect their customers in the least. Fuck I am so disappointed. If you could have postponed your greed a couple years you would have gotten a similar amount of money out of direct sales.”

“Well…. time to start another VR company. Fuck facebook and fuck the ads that come with it.”

Facebook is not a company of grass-roots tech enthusiasts. Facebook is not a game tech company. Facebook has a history of caring about building user numbers, and nothing but building user numbers. People have made games for Facebook platforms before, and while it worked great for a while, they were stuck in a very unfortunate position when Facebook eventually changed the platform to better fit the social experience they were trying to build.

Don’t get me wrong, VR is not bad for social. In fact, I think social could become one of the biggest applications of VR. Being able to sit in a virtual living room and see your friend’s avatar? Business meetings? Virtual cinemas where you feel like you’re actually watching the movie with your friend who is seven time zones away?

Fortunately, the rise of Oculus coincided with competitors emerging. None of them are perfect, but competition is a very good thing. If this means there will be more competition, and VR keeps getting better, I am going to be a very happy boy. I definitely want to be a part of VR, but I will not work with Facebook. Their motives are too unclear and shifting, and they haven’t historically been a stable platform. There’s nothing about their history that makes me trust them, and that makes them seem creepy to me.

If this early blowback is any indication, early adopters to virtual gaming seem suspicious of Facebook, to say the least. But the feeling is not mutual.

Facebook CEO Mark Zuckerberg commented on the acquisition in a post to his own Facebook page Tuesday, writing that he believes augmented reality will one day be a part of daily life for billions of people.

“Virtual reality was once the dream of science fiction,” Zuckerberg wrote. “But the Internet was also once a dream, and so were computers and smartphones. The future is coming and we have a chance to build it together.”

Chris Dixon, a venture capitalist who invested in Oculus as a partner with the Andreessen Horowitz firm, expressed mixed emotions over the acquisition in a Tuesday post on his personal blog.

“Facebook’s support will dramatically accelerate the development of the virtual reality ecosystem,” Dixon wrote. “While we are sad to no longer be working with Oculus, we are very happy to see virtual reality receive the support it deserves.”

The news took most everyone by surprise—everyone but the r/oculus community, which actually had a hint that it was coming. Reddit user threewolfmtn posted a thread Jan. 28 that indicated something was up: “So no way to confirm this, but my friend works in the same building as Oculus, and he ran into Mark Zuckerberg taking the elevator to Oculus’ floor.”

Threewolfmtn then posed the $2 billion question: “Do you think he was just checking it out? Or is there somethign (sic) more devious going on?”