Wall Street gets a virtual reality app from Fidelity

Sure you could use an Oculus Rift for stuff like simulating Westeros or playing mind-blowing games… but when you can check your stock portfolio in virtual reality, why would you want to? Fidelity is out with what it claims is the first financial app on Oculus (and we’re inclined to believe them).

As described in MIT Technology Review:

In Fidelity’s prototype virtual environment… stocks are represented as office towers and lumped together in sector “neighborhoods.” The buildings’ footprints are shaped by trading volume and their rooftops are red or green depending on changes in price. 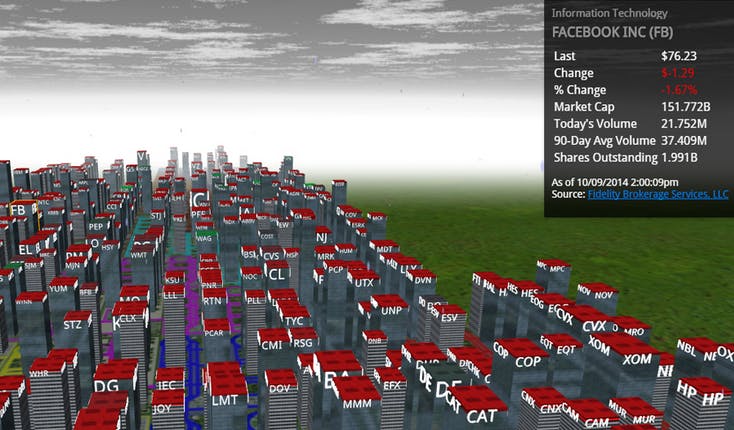 Fidelity Labs Vice President Hadley Stern talked to MIT about VR’s impact on the financial world. “We want to get their feedback on this and start to think: how would active traders and other investors use virtual worlds to understand data?”

The app, called StockCity, employs a virtual environment in some kind of clever ways. When the market is open, it looks like daytime; when it closes, it becomes night. According to Stern, traders might be able to spot opportunities and make decisions easier, were the whole mess mapped onto a virtual city.

What impact VR apps would have had on the total systemic failure back in 2008 is unclear, but we like to imagine Wall Street’s fat cats romping through StockCity, Godzilla-style, shoving money in their virtual pockets.