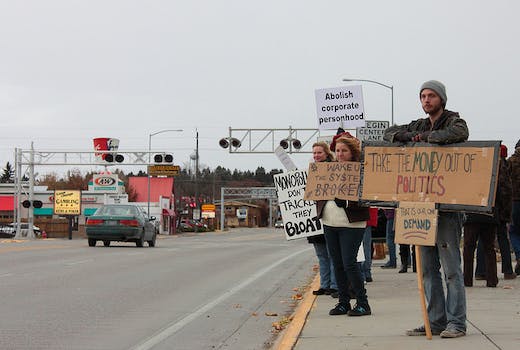 In small towns like Kalispell, Montana, the Occupy movement doesn't rely on big social networks to spread the word.

In Portland, Ore., Occupy Wall Street protestors were preparing for a battle Saturday. Mayor Sam Adams had given them until 12:01 a.m. Sunday to end their occupation and police were about to enforce the order. Twitter and Facebook lit up with information about the eviction—it was how the movement delivered its orders, how the police made its requests and how the media informed everyone.

Six hundred miles away, in Kalispell, Montana, things were very, very different. The group that gathered on Saturday afternoon, battling the frigid Montana wind normal for this time of year, was noticeably smaller and noticeably older.

And unlike other Occupy groups, which have relied heavily on social media to organize, the one in this town of less than 20,000 has been mostly organized by word of mouth and fliers. This was more of a Meetup crowd than Facebook or Twitter.

And many found the protest through a simple, no-frills website called OccupyTogether.org. As of Monday, more than 2,414 cities were listed on the website as having Occupy events. According to some gathered in Kalispell, it was one of the most reliable ways to get information.

OccupyTogether.org calls itself “as grassroots as it gets.” The website says it’s not officially affiliated with Occupy Wall Street or the original gathering in New York, At the core of the site are a handful of volunteers with the mission of simply distributing information about Occupy events.

There is a discussion forum, but the site’s main feature is a directory listing the what, where and when of various protests across the United States and the rest of the world. The site has been funded completely out of pocket with the exception of a one-time private donation of $1,000 for site-hosting costs, and there are no plans to solicit donations.

In this community, that grassroots presence is beating the giants of social media. Although there is a Facebook group for Occupy Kalispell, it has been used little in recent weeks. As of this week, it only had 28 fans.

Cynthia Geer, who has attended the hour-long protests every Saturday for the last month and established the Facebook page, said one reason the group has been only lightly used is because there hasn’t been a change in time or venue. The regulars show up every week, same time, same place. She also said she got more of a response from posting fliers around town.

One of the few people who did find out about Occupy Kalispell on Facebook is also one of the few regulars below the age of 30. Garrett Jacobson said he saw a post on Facebook about the protest and “made a sign and walked right down here.”

Jacobson said it’s impressive how social media has been used in other places to organize the protests, but here its mostly been overlooked. He thinks it has to do with the fact that very few young people seem to be attending the rallies, an age group who would be most proficient with social media. He also said that Kalispell, located in the northwest part of the state, is a predominantly conservative town.

Geer said some of the Occupy regulars plan on building a website for Occupy Kalispell.

And that may be the right metaphor for the way people gather online. Not everyone cares to live in big, anonymous cities. Some prefer small towns. What the success of OccupyTogether in Kalispell suggests is that there’s more than one way to connect and motivate communities. And one size doesn’t fit all.