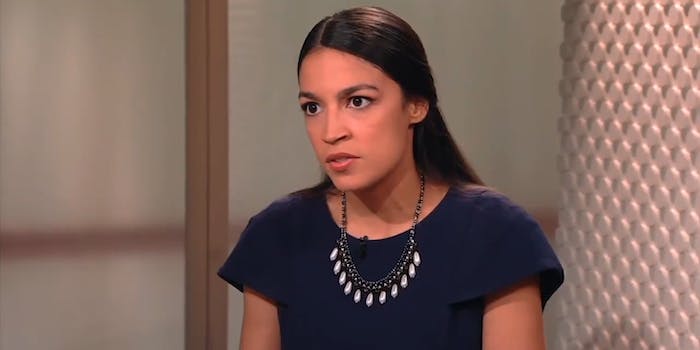 The clip was cynically edited and pushed by a right-wing journalist.

Far-right media outlets have jumped on the chance to attack and mock New York Democratic congressional candidate Alexandria Ocasio-Cortez on Monday, after an edited interview clip appeared to show her unable to explain her characterization of Israel’s conflict with Palestine as an “occupation.”

Although the comments made no impact after airing on Friday’s edition of PBS’s Firing Line, they went viral when trimmed to a one-minute clip published Sunday night on Twitter by Daily Wire reporter Ryan Saavedra, who described it as an attack on Israel.

When pressed on what she meant she struggled to give an answer and then admitted she does not know what she is talking about. pic.twitter.com/e3Uq1eupD3

“I also think that what people are starting to see, at least in the occupation of Palestine, is just an increasing crisis of humanitarian condition and that to me is just where I tend to come from on this issue,” Ocasio-Cortez tells conservative host Margaret Hoover in the cut.

“You used the term ‘occupation of Palestine’,” Hoover asks. “What did you mean by that?”

When pushed further on the topic, however, Ocasio-Cortez appears to hesitate before admitting that she is not an “expert on geo-politics on this issue.”

This is where the clip ends.

The aim was to trigger outrage among mainstream conservatives who have been traditionally supportive of Israel and the GOP’s pro-Israel policies.

Ocasio-Cortez, a 28-year old socialist and Bronx native who defeated an establishment Democrat in a recent midterm primary, is already a controversial figure because of her left-wing politics, so pundits on the right were eager to utilize this to discredit her.

If she were a Republican, she'd now be labeled stupid by every major media outlet in America. But she's a democratic socialist, which is itself inherently stupid, so she will instead be given a free pass. https://t.co/U8499XMFcH

What a shock. Alexandria Ocasio-Cortez just says stuff and has no clue what she's talking about. She has her hard left talking point ready to go: Israelis are "occupiers of Palestine." Then, when asked to elaborate on that insane take, "[LOL] I'm not the expert on geopolitics." https://t.co/13ZIFTGpg2

The Republican Jewish Coalition, which had previously branded the Democrat an anti-Semite and racist, also leapt onboard.

Alexandria Ocasio-Cortez bashes Israel while admitting she is clueless about what is going on there. She simply toes the far-left, radical agenda. Elected Democrats are endorsing this when they endorse her. @Ocasio2018 pic.twitter.com/KjfYlMfsNx

Later in the day, leftists supporters began to also buy into a narrative pushed that Ocasio-Cortez had been apologetic or retreated on her position on Israel-Palestine during same PBS interview, where she said “she may have not used the right words” when calling Israel’s treatment of Palestine an “occupation.

Rising Democratic star @Ocasio2018, soon to go to Congress from NY, all but apologized for using words massacre and occupation about Israel, saying she spoke as an activist, and she is no expert on the Middle East and is willing to learn and evolve. https://t.co/pDfwwf4yG9 pic.twitter.com/MnFJA6E9r8

That sparked a backlash among her supporters.

The strategy of a progressive takeover of the Democratic Party works like this: you get a bunch of socialists to run as Dems, most of them never get in, the few who do get in quickly fall in line with the establishment, and then you repeat this strategy the next election cycle. https://t.co/yoYESiG41I

Some were quick to point out that, in fact, at no point did the Democrat apologize for her politics or back pedal on her position.

The tweet headline was somewhat misleading. She didn't apologize for using the word occupation, but she shyed away bc she was caught off guard & admitted ignorance on the issue. She just came across to me more as unprepared in foreign policy, not as ready to sell-out.

Ocasio-Cortez’s office has yet to comment on it all but the case as a whole displays the power of the right-wing media ecosystem to push a narrative from one single tweet that causes outrage and mass backlash.

More frighteningly, to create such momentum that even the Democrat’s own supporters started to doubt her.