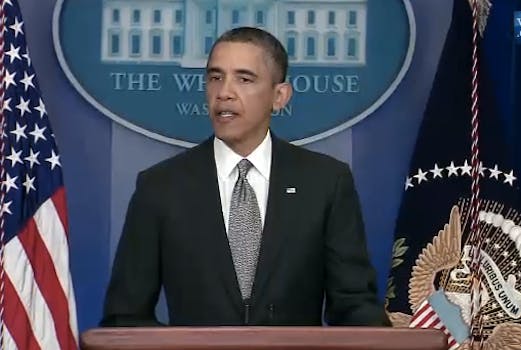 Like last year, President Obama's administration has stated in no uncertain terms that it will shoot down the controversial cybersecurity bill.

The efforts of hundreds of lobbyists, $55 million in lobbying money, and support of federal intelligence-gathering agencies were all in vain.

The White House will veto the controversial Cyber Intelligence Sharing and Protection Act (CISPA) as it currently stands.

Like last year, and in contrast to a Thursday memo that stopped short of such a promise, President Obama’s administration has stated in no uncertain terms that it will shoot down the controversial bill. A White House representative confirmed the decision to the Daily Dot.

CISPA is a cybersecurity bill, intended to make it easier for the government and private companies to work together to stop hackers. Internet privacy advocates have resoundingly criticized it, since it effectively allows those companies to bypass privacy laws to send what they know to the government—including users’ personal information. That concern is readily apparent in the White House’s veto promise.

The Administration […] remains concerned that the bill does not require private entities to take reasonable steps to remove irrelevant personal information when sending cybersecurity data to the government or other private sector entities. Citizens have a right to know that corporations will be held accountable – and not granted immunity – for failing to safeguard personal information adequately. …

[I]f the bill, as currently crafted, were presented to the President, his senior advisors would recommend that he veto the bill.

The remarks come in between the finalization of CISPA’s markup—it added four amendments, none of which satisfied privacy groups—and the bill’s vote in the House, which will come Wednesday or Thursday.

CISPA’s authors, Mike Rogers (R-Mich.) and Dutch Ruppersberger (D-Md.) have largely dismissed privacy concerns, incrementally adding provisions that didn’t do enough, according to groups like the American Civil Liberties Union. But over the course of the bill’s evolution—it passed the House in April 2012 but was never touched in the Senate—millions of people have voiced their opposition to the bill online.

Most impressive of those, perhaps, is the White House petition, simply titled “Stop CISPA,” which recently gathered more than 100,000 Americans’ signatures in 30 days. Such petitions, if they reach the minimum threshold for signatures—as this one did—require the White House to issue an official statement addressing its concerns.

The Obama administration has yet to formally answer that petition, though the veto promise effectively accomplishes that.