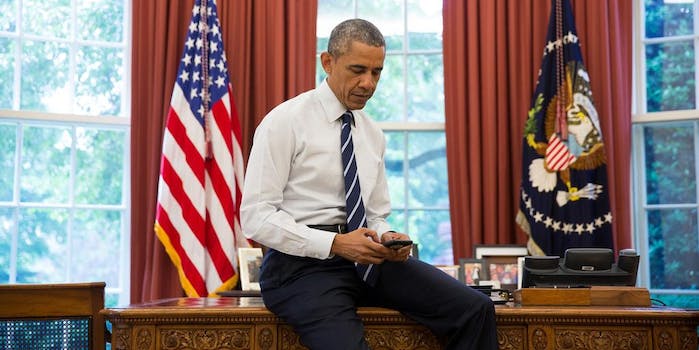 Obama will pop up in your mentions.

President Barack Obama is directly engaging with Congressional Republicans over the Iran nuclear deal… on Twitter.

The @POTUS account, which the White House set up as a more personal social-media venue for the president, lit up on Wednesday afternoon with responses to several tweets from high-profile conservatives in Congress.

Obama responded to Rep. Steve Scalise (R-La.), the third-ranking House Republican, by rebutting his assertion that the deal contained secret provisions. “My staff can brief you on any question about any part of the deal,” the president tweeted.

Important detail – there are no secret deals. My staff can brief you on any question about any part of the deal. https://t.co/UO0B5xCOPh

A senior administration official told the Daily Dot that the White House has hosted several classified briefings about the deal that were open to any member of Congress. The official also said that all documents related to the deal are available for them to review.

“In terms of documents, Congress has what we have,” the official said. “Many of these documents are public and were posted to the Internet the day the deal was announced. For the non-public documents in our possession, we have provided access to Congress.”

“We are not withholding any JCPOA documents in our possession from Congress,” the official said, using the acronym for the deal’s official name, the Joint Comprehensive Plan of Action.

Obama also responded to a tweet from Sen. Mitch McConnell (R-Ky.), the majority leader, by reaffirming his oft-repeated assertion that Congress must choose between approving the Iran deal and risking war with the Islamic Republic.

Conservatives have bristled at Obama’s suggestion that his deal and war are the only two options, but Obama warned on Twitter that “Iran’s nuclear program accelerates if Congress kills this deal.”

The choice is ultimately between diplomacy and war. Iran's nuclear program accelerates if Congress kills this deal. https://t.co/nvBeO1Omko

The president’s Twitter engagement follows a speech earlier Wednesday at American University defending the Iran deal, which the United States and five Western allies reached with the Islamic regime on July 14 following years of secret negotiations. The AU speech, like Obama’s announcement of an interim deal earlier this year, was carried live on Iranian state TV.

In response to a tweet from an anti-war activist, Obama called the agreement “the strongest nuclear deal ever negotiated.”

Congress has until Sept. 17 to vote to approve or disapprove of the deal as a result of compromise legislation enacted in May. Obama has vowed to veto any resolution disapproving of the deal. If that happened, two-thirds of both chambers would need to vote to override his veto. In May, 150 House Democrats sent Obama a letter supporting the deal, suggesting that they would stand firm if it became necessary to vote against a veto override.

Photo via The White House/Twitter