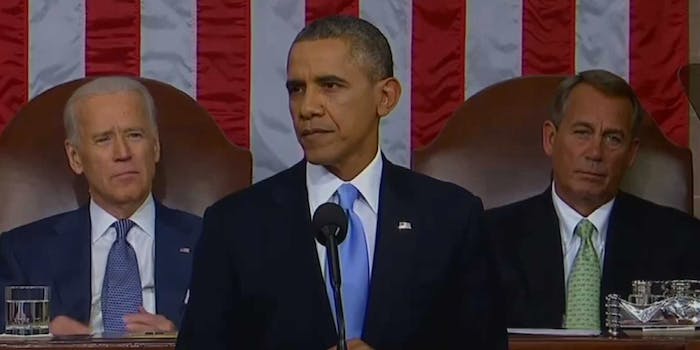 You can watch the president's full State of the Union address here.

Early in his State of the Union address, President Barack Obama described the United States as “better-positioned for the 21st century than any other nation on Earth.”

And in a speech heavily focused on the continued restoration of the American economy—one livestreamed on YouTube, no less—the commander-in-chief touched on a number of 21st century-specific issues related to jobs, education, and security.

A week and a half after unveiling his proposed changes to the National Security Agency’s bulk-data collection programs, Obama reiterated his pledge to reform government surveillance programs.

“[W]orking with this Congress, I will reform our surveillance programs—because the vital work of our intelligence community depends on public confidence, here and abroad, that the privacy of ordinary people is not being violated,” the president said while addressing his administration’s approach to counter-terrorism.

Among a slew of reforms based on the findings of an independent NSA review board, Obama said the intelligence agency will no longer have immediate access to phone records without warrants and limit the scope of records that can be collected. However, the man credited with precipitating the national debate on surveillance programs, NSA leaker Edward Snowden, was noticeably absent from the speech.

During the foreign policy section of his speech, the president also reiterated a call that was front-and-center in last year’s State of the Union to increase the focus on “new threats like cyberattacks.”

These issues, however, were dwarfed by the emphasis the president placed on his domestic agenda. Obama spent most of his 6,778-word message to Congress focused on improving the economy and the cadre of issues related to that goal. The highlight of the president’s speech was the announcement of an executive order to raise the minimum wage for federal contractors to $10.10 an hour, with a plea to Congress to do the same for all American workers.

“This will help families,” he said. “It will give businesses customers with more money to spend. It doesn’t involve any new bureaucratic program. So join the rest of the country. Say yes. Give America a raise.”

In addressing the unique demands of a 21st century economy, Obama also called for a number of policy changes related to online issues. The president lent his support to bipartisan congressional efforts to pass a patent-reform law that would allow business to “stay focused on innovation, not costly, needless litigation.” These legislative efforts aim to destroy the business model of so-called “patent trolls” accused of exploiting an outdated patent system to unscrupulously leech money from tech companies.

And in a section of his speech devoted to strengthening America’s educational system to better prepare students for the modern economy, Obama gave a status update on his initiative to bring high-speed Internet access to 99 percent of U.S. students by 2018.

“Last year, I also pledged to connect 99 percent of our students to high-speed broadband over the next four years,” the president stated. “Tonight, I can announce that with the support of the FCC and companies like Apple, Microsoft, Sprint, and Verizon, we’ve got a down payment to start connecting more than 15,000 schools and 20 million students over the next two years, without adding a dime to the deficit. “

Later on, the president used his annual address to both chambers of Congress to defend his signature piece of legislation: the Affordable Care Act. While the rollout of the program’s central provision, an online health insurance marketplace, was dampened by a plague of technical snafus, the president focused instead on the program’s successes.

“Already, because of the Affordable Care Act, more than 3 million Americans under age 26 have gained coverage under their parents’ plans,” Obama said. “More than 9 million Americans have signed up for private health insurance or Medicaid coverage. And here’s another number: zero. Because of this law, no American can ever again be dropped or denied coverage for a pre-existing condition like asthma, back pain, or cancer.”

You can watch the president’s entire speech below.