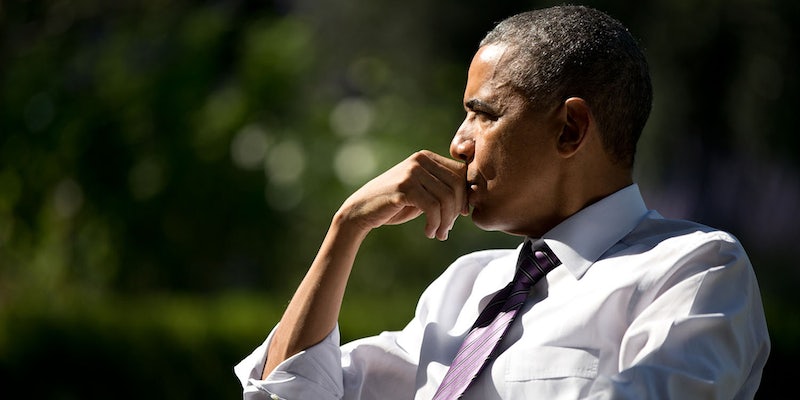 The state of our union is strong. Just not on TV.

Admit it: you don’t care about the State of the Union.

Granted, if you’re American, you probably have some interest in the actual state of the Union, in that it’s where you probably keep the majority of your stuff. But when it comes to the annual, constitutionally mandated speech delivered by the President of the Unites States to a joint session of Congress, your interest level is probably nestled somewhere between “none” and “I guess, but out of some weird sense of obligation. As long as there’s no football on. There’s no football on, right?”

According to Nielsen, 33 million people turned in to watch President Obama‘s speech last year. That’s about a one-third drop in total viewership since 2009. It’s just the latest data point on a downward ratings slope for the address that seems unlikely to reverse itself any time soon.

The man who will deliver the speech seems understand this. More than that, he seems to be okay with this. Based on his actions during the run-up to this year’s address, it seems as if President Obama doesn’t much care about the State of the Union address either.

While the president is doing what presidents often do and using the speech as the lynchpin for unveiling his agenda for the next year, he appears to be taking the usual preview a step further. In the days leading up to the address, Obama has pushed many substantive policy revelations out of the speech itself and promoted them ahead of time.

By downplaying the State of the Union speech in favor of a larger “State of the Union Week,” Obama can show that he understands not only the political climate of Washington in 2015, but also the larger Internet-saturated media culture in which he has to operate.

Article II, Section 3 of the U.S. Constitution states that the president “shall from time to time give to the Congress information of the State of the Union.” Until the early part of the 20th century, the president discharged this obligation by simply writing a letter to Congress. The report eventually transformed into a scheduled and carefully crafted speech broadcast live to the American public via radio and eventually television.

Nowadays, the official purpose of the State of the Union may be for the Commander in Chief to give Congress the skinny on what he’s thinking. In practice, however, the address serves as more of an advertisement for the president’s agenda. It is the only presidential publicity stunt that Congress must formally invite the nation’s chief executive to deliver.

In 2015, the divide between talking to “the people” and talking to Congress may be larger than at any point since the introduction of the modern address. While Obama has paid some lip service to working with the new, fully Republican-controlled 114th Congress, the odds of significant congressional accomplishments, bipartisan or otherwise, are low. The last Congress was among the least productive in history, and the current composition of the legislature isn’t much different.

Obama recognizes this. He knows that, no matter how eloquent his oratory during the State of the Union, he’s not going to convince anyone in the House chamber of anything substantive.

As a result, Obama is aiming his address at the people watching at home and following the conversation online.

Over the past several weeks, the president has announced a whole slew of new proposals in what the administration has called a “preview” of his speech. Obama has put forward new initiatives on strengthening America’s cybersecurity, eliminating barriers to municipal broadband projects, and making community college programs free for students earning over a 2.5 GPA. On Saturday, he unveiled a major Robin Hood-stye tax overhaul that would, among other provisions, raise taxes on capital gains (primary paid by the wealthy) while expanding tax credits for poor and middle-class families.

Some of these proposals actually stand a chance. The FCC likely has the authority to invalidate state laws blocking cities from establishing their own fiber networks. But Obama will be hard-pressed to get a tax hike on rich people through two Republican-led houses of Congress. The much-publicized plan is so unrealistic that it only makes sense as a symbolic way to rally the Democratic base. (Perhaps it is also a model for lawmakers in the few remaining liberal-dominated statehouses around the country.)

Nothing about these programs is particularly revolutionary. Any of them would fit in any of Obama’s previous State of the Union addresses. By rolling them out one at a time over the course the month, however, the president allowed each proposal to garner significant attention. Each idea won its own daily news cycle, whereas if they had all appeared in one speech, the cybersecurity or community college plans would have been overshadowed by the inevitable partisan screaming about taxes.

Releasing each proposal individually shows a savviness about how news is consumed in 2015. Each proposal became its own trending topic on Facebook. There will almost certainly be another trending topic for Tuesday night’s speech, but this way, the one grand speech didn’t swallow up the individual components.

For a lame-duck president trying his hardest not to look moribund, generating a flurry of policy discussion is a worthy achievement. By tying each policy discussion into a larger agenda that he will lay out on Tuesday night, Obama gives the entire process a sense of cohesiveness. If this were handled outside the scope of the State of the Union, the swarm of policies would make the administration look like it was trying to too many things at once.

The actual State of the Union speech doesn’t really matter at this point. Other than what is likely to be some solid oratory, and perhaps another personal apology to the people of France for skipping the anti-terrorism solidarity rally, President Obama is unlikely to reveal anything in the speech that he hasn’t already discussed on Twitter, Facebook, YouTube, Instagram, Vine, and probably Snapchat too at this point. He could probably skip the speech and retain the political benefit of the proposals.

In fact, the only thing that matters less than speech itself are the gatekeepers of establishment media who traditionally cover it. Instead of talking to the New York Times or the Washington Post after his speech, Obama is slated to chat with three YouTube celebrities—fashion vlogger Bethany Mota, musician and environmental blogger Hank Green, and comedian/song parodist GloZell.

Between the three of them, these YouTube stars’ channels have over 13.7 million subscribers. It may not quite equal the 33 million people who watched the State of the Union on TV last year, but it’s safe to say the trend lines of those two numbers are probably going to meet at some point in the near future.

Even as pundits continue to assess the wisdom of the president’s dramatic shift in State of the Union messaging, early data suggest that his strategy and his actual policy ideas are bearing public-opinion fruit. A Washington Post-ABC News poll released on Monday had his approval rating hitting 50 percent for the first time since early 2013.