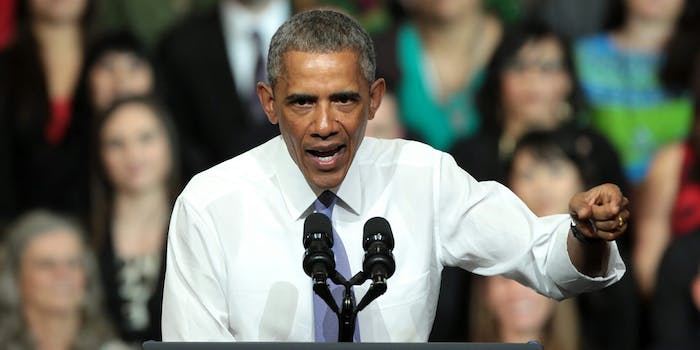 Former President Barack Obama slammed the nature of politics in the wake of President Donald Trump’s time in office, condemning the environment that he said has become “nasty.”

Obama made two speeches on Thursday, stumping for gubernatorial candidates in New Jersey and Virginia. The remarks were the most high-profile comments Obama has made since leaving office in January.

Without naming Trump by name, Obama–like former President George W. Bush in an unrelated speech earlier in the day–touched on the political climate that has become commonplace since the 2016 election.

“We’ve got folks who are deliberately trying to make folks angry, to demonize people who have different ideas, to get the base all riled up because it provides a short-term tactical advantage,” he said in Virginia, later adding: “So the question for you tonight for the next 19 days: Do you want a politics of division and distraction, or do you believe in a better kind of politics?”

Obama spoke flatteringly about Ralph Northam, who is running to replace Democratic governor Terry McAuliffe, in a state that is often seen as “purple,” a mix of Democrats and Republicans. The race is seen as somewhat of a litmus test for the 2018 midterms, to see if Democrats can transition animosity toward Trump into votes for liberal candidates.

“At a time when our politics just seem so divided and so angry and so nasty, it’s whether we can recapture that spirit, whether we support and embrace somebody who wants to bring people together,” Obama said.

You can watch all of Obama’s remarks here: