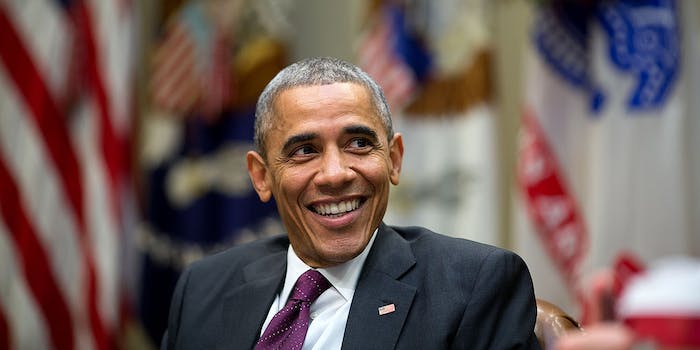 The commander-in-chief sure loves taking selfies.

Selfies don’t get much bigger or better than this.

President Barack Obama exercised his love for selfies again on Tuesday, when he honored the U.S. Women’s National Soccer Team, winners of the 2015 World Cup, at the White House.

Of course I would cut my own head out of a selfie with @barackobama thank you for having us!!!

“This team taught all of America’s children that playing like a girl means you’re a badass,” Obama said. “Perhaps I shouldn’t have used that phrase; ‘playing like a girl’ means being the best,” he continued with a laugh, while acknowledging his language.

The selfie was snapped by USWNT forward Abby Wambach, who caught the commander-in-chief front and center.

The selfie wasn’t the only photo that came out of the event. The team also took photos of their own all over the White House, reports the Washington Post.

A special @WhiteHouse portrait with an appearance by the Washington Monument. pic.twitter.com/HYhOLPPfQD

Besides calling the USWNT badass, Obama complimented them on inspiring young men to recognize young women in a different way.

Obama gave midfielder Carli Lloyd a special shout out, praising her performance at the 2015 World Cup. The president also acknowledged that someone briefly changed Lloyd’s title on Wikipedia to “President of the United States” after the World Cup win. “By the way, the job is about to open up—what’s another candidate in the mix?” Obama said.

“I guarantee Carli knows more about being president than some of the candidates who are running,” Obama added.

In return for Obama’s selfie and dad jokes, the three-time winning USWNT gifted the 44th president with a No. 44 team jersey.