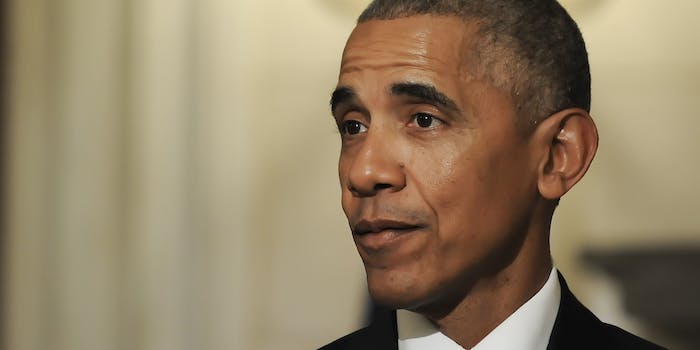 Obama didn't strike back because he thought Clinton would win.

President Barack Obama reportedly didn’t think he’d have to retaliate against Russia for tampering with the U.S. election, but now he plans to strike back.

“I think there is no doubt that when any foreign government tries to impact the integrity of our elections that we need to take action, and we will at a time and place of our own choosing,” Obama told NPR’s Steve Inskeep.

Russia has denied the U.S. intelligence community’s claims that it waged cyberattacks aginst U.S. political entities, which reportedly include both the Democratic National Committee (DNC) and the Republican National Committee (RNC). Tens of thousands of emails and documents stolen from the DNC and Clinton campaign chairman John Podesta, while there were no such leaks of Republican documents.

“They need to either stop talking about this or finally present some sort of proof,” a Putin spokesperson told the BBC.

Trump has also cast doubt on the intelligence community’s claims that Russia perpetrated the cyberattacks, calling the claims “ridiculous.”

“Multiple high-level officials” told NBC News that Obama had not planned to take this fighting stance on Russia because, the anonymous sources said, “They thought [Clinton] was going to win, so they were willing to kick the can down the road.”

While Obama says some forms of retaliation “may be explicit and publicized,” other actions “may not be.” The form of reprisal may come in the form of sanctions or potentially in hack-backs, or counter-cyberattacks.

The situation remains highly dynamic, however. According to unnamed U.S. officials who spoke to CNN, Russian hacking against U.S. entities “has continued largely unabated since the November election.”