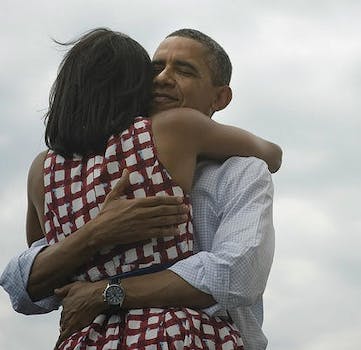 Barack Obama claimed victory in Tuesday’s election by posting a personal message to his Twitter followers, and quickly followed that up with a post that became the most retweeted tweet of all time.

Obama hopped on Twitter to post the personally signed tweet shortly after NBC called the race in his favor. “We’re all in this together. That’s how we campaigned, and that’s who we are. Thank you. -bo,” he wrote.

A follow-up, simply reading “Four more years,” with a photo of Obama hugging his wife Michelle, became the most retweeted tweet of all time, with 302,176 retweets as of midnight ET. That surpassed his personal record, set earlier in the evening, within minutes, and also beat Justin Bieber’s previous all-time record.

The campaign posted the photo to Facebook as well, where it received more than a million likes in under an hour.

Obama had other tweets which soared above the 100,000 mark Tuesday, as the campaign asked followers to retweet if they were on Team Obama and told them “this happened because of you.”

As the news networks declared an Obama victory, election-related tweets soared to 327,453 per minute at 11:19pm ET, while more than 20 million election tweets had been posted by 10:16pm, making it the “most tweeted about event in US political history” according to Twitter.