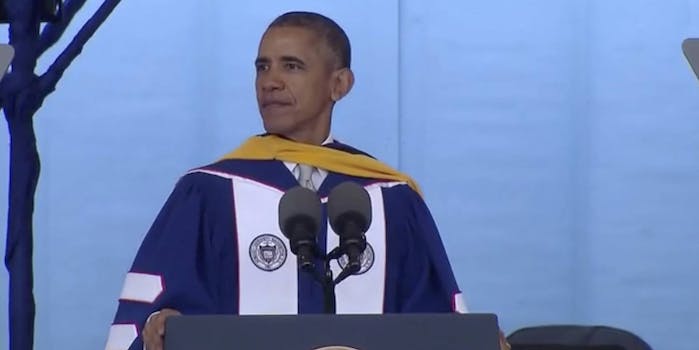 'You might say to yourself a little phrase that I found handy these last eight years: yes we can.'

President Obama delivered his final commencement speech while in office to an historically black college on Saturday. The commander in chief spoke for 45 minutes at Howard University’s graduation ceremony, much of which was highlighted on the White House’s official @WHLive Twitter.

What stood out in particular wasn’t just the hopeful tone of Obama’s remarks but his explicit embrace of being African-American. Perhaps the most powerful statement the president could make was to speak directly to the students in front of him, calling on a similar embrace of background and ethnicity.

The president also called on Howard grads to continue to inspire as well as fight for the greater good. He specifically cited a student named Cierra Jefferson, the first in her family to graduate from higher education. The daughter of a single mother who worked relentlessly to provide for her family, Jefferson turned down a full ride to Harvard in favor of attending Howard.

"People like Ciearra are why I remain so optimistic about America. Young people like you are why I never give in to despair." —@POTUS

"That’s how we change our politics: By electing people at every level who are representative of and accountable to us." —@POTUS on voting

"Change is the effort of committed citizens who hitch their wagons to something bigger than themselves, and fight for it every single day."

He closed his remarks with the catchphrase that effectively launched his successful presidential campaign: yes we can.

Following his Howard University commencement speech, the president is set to address Rutgers students as well as the United States Air Force Academy. The engagements are to be his final graduation speeches while in office.