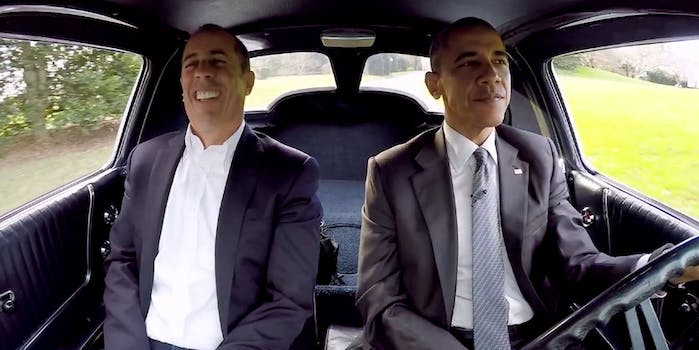 POTUS is still rocking the Surge.

If one of your New Year’s resolutions this year is to get in shape, try taking a page out of President Obama’s fitness playbook and try out a Fitbit Surge.

The president’s wrist accoutrement was on full display during his appearance on Comedians In Cars Getting Coffee, Jerry Seinfeld’s online show that invites high-profile humorists into classic cars to drive around and get coffee. Guests in the past include Tina Fey, Stephen Colbert, Jimmy Fallon, and Julia Louis-Dreyfus.

As soon as Obama gets behind the wheel of the gorgeous sky blue 1963 Corvette Stingray for the season seven premiere, it’s hard to miss his Fitbit Surge taking up camera real estate. Obama’s affinity for the Surge has been noted in the past, but he’s stuck with it even through the launch of the Apple Watch despite using other Apple prodcuts. (Tim Cook has made multiple appearances at the White House, and Obama received the iPad 2 from Steve Jobs before its official launch.) 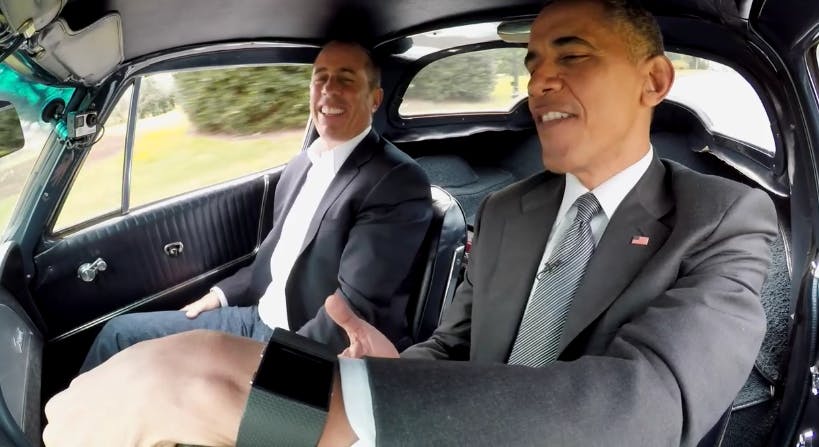 Comedians In Cars Getting Coffee

POTUS undoubtedly leads an active and tiring lifestyle, and with the GPS tracking, a heart rate monitor, seven-day battery life and sleep tracking, the comprehensive features in the Surge can provide a full picture of the president’s day.

President Obama likely sticks with the Surge because, as he told Jimmy Kimmel in another comedic interview, he’s not allowed to use smartphones with recording devices in them. In fact, he still has a 2007 model BlackBerry. Without being allowed to keep an iPhone or Android device in his pocket, the Apple Watch and wearables from Samsung, LG and others are simply not an option for the commander-in-chief.

President Obama’s appearance isn’t the first for a comedy Web series. He was on Funny Or Die’s Between Two Ferns with Zach Galifianakis in March 2014. You can watch the full episode with the president on Comedians In Cars Getting Coffee here.

Photo via Comedians in Cars Getting Coffee