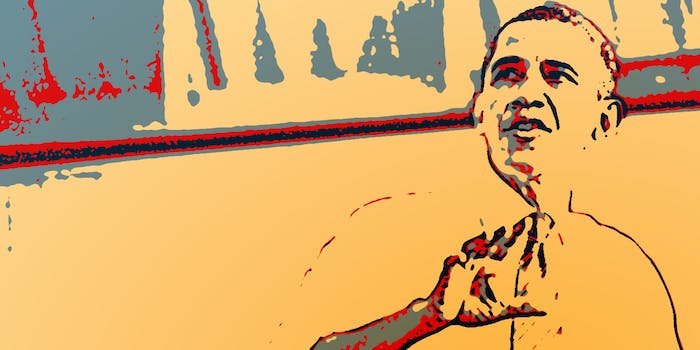 Obama makes history as first U.S. president to pose for an LGBT magazine

Obama continues to break barriers when it comes to media access to the White House.

President Barack Obama is on a media streak.

The commander-in-chief made waves earlier this year by giving exclusive interviews to a crop of non-traditional digital media sites like VICE News, Vox, Buzzfeed, and Mic. Now, he’s also become the first U.S. President to pose for an LGBT magazine.

#BarackObama is the 1st U.S. president to be photographed for an #LGBT publication: https://t.co/bAo1A8CwYL #Out100 pic.twitter.com/Tdd8KJtKqq

Obama is one of Out Magazine‘s Out100, and his portrait by photographer Ryan Pfluger graces the cover of the current issue. He also granted the iconic gay magazine an exclusive interview that provides a glimpse into his own relationship with a gay college professor, his observation of HIV/AIDS discrimination in the 1980’s, and why he took a stand for the rights of LGBT Africans during his visit to Kenya this year.

In the longest statement from the Out interview, Obama described why he compared LGBT persecution in Africa to the history of racism and the civil-rights struggle here in the U.S.

“It’s important for us to acknowledge our own history. In the United States we talk a lot about working to perfect our union. And there is a lot of work to be done with respect to civil rights in the United States—for African-Americans, LGBT people, for many others. When I travel around the world and speak to foreign audiences, I think it is helpful when I acknowledge our own shortcomings and speak honestly about our history and the lessons we’ve learned along the way instead of pretending that we have all the answers.”

Remembering his first close gay friend, Obama gave a shout-out to former Occidental College political science professor Dr. Lawrence Goldyn. Obama recalled Goldyn’s fearlessness as an out gay professor and advisor to LGBT students; in 1978, it was extremely risky to be out in such an environment, and Goldyn lost his job after a short time.

For his consistent support of the LGBT community, Out named the president its “Ally of the Year.” In the same issue, Caitlyn Jenner is named Newsmaker of the Year, soccer star Abby Wambach is deemed Athlete of the Year, and Portlandia‘s Carrie Brownstein takes the crown for Artist of the Year.

Out editor-in-chief Aaron Hicklin described his day walking around with Obama as “extraordinary” and said, “I’m not remotely religious, but I felt blessed nonetheless.” Obama stopped to shoot some hoops, Obama stopped in an art gallery and chatted up the artist, Obama said a quick prayer at church. It’s all everyday stuff, but for the Out crew, it was a moment in history.

H/T Out Magazine | Photo via Daniel Borman/Flickr (CC by 2.0) | Remix by Max Fleishman