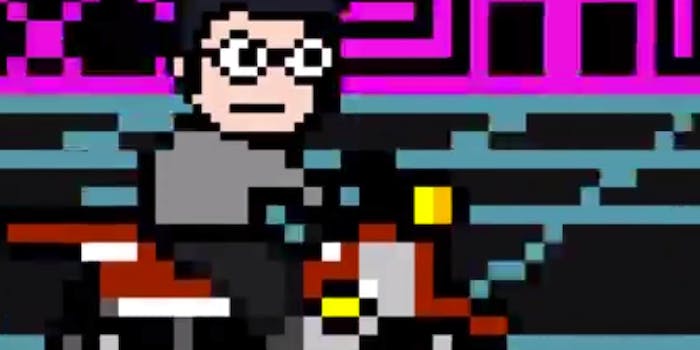 Inside the making of a music video starring Nyan Cat

The little meme that could stars in an all-GIF music video.

Nyan Cat’s classic-Nintendo-on-hallucinogens aesthetic has brought joy to the Internet since illustrator Chris Torres uploaded his original hyperkinetic cat GIF to his personal website in 2011. Nyan Cat was remixed into a YouTube video and became a web sensation, as an adorable, brightly-colored animated cat/Pop Tart hybrid backed by a manically cheerful Japanese pop song is wont to do. The original YouTube has over 105 million views, which is borderline worrisome, but the point is, Nyan Cat is an intrinsic part of Internet culture. It’s been given countless remixes, got Tom Waits’d, and even won a lawsuit. Nyan Cat will linger in the corridors of our digital collective consciousness forevermore.

And now Nyan Cat and its creator are invading a new realm: the EDM scene. After establishing a relationship with enfant terriblonkzeepzoop Skrillex, Chris Torres has created the world’s first mainstream GIF-only music video for Skrillex opener Alvin Risk. Risk quietly released the video for Zoom on New Year’s day as a special present for fans, and the trippy kawaii robot dance party vibe will inject many an after party with a boost of energy in 2014.

The process of creating the video was slightly more daunting than just throwing something on your average GIF blog (and by slightly, I mean “thousands of times more”). Torres couldn’t recall the exact number of GIFs he illustrated, there were so many. “I spent maybe three, four months actually making everything for the video,” he says. “I’ve never really done anything this expansive before.”

Torres’ manager, Ben Lashes, stitched the GIFs together after Torres made them, and the video’s overall look was a collaboration between Torres, Lashes, and Risk. “It was just kinda supposed to be a crazy, spacy, Tron-like, 8-bit kind of experience,” Torres says. They definitely succeeded. There is a spinning pizza GIF and a little dude who looks like Harry Potter running frantically through a futuristic alien-invaded landscape. [Sidenote: After Googling Alvin Risk, I realized he looks like Harry Potter so it’s probably supposed to be him, but one could easily misconstrue this to be a fun/terrifying music video sequel to Deathly Hallows so I’m letting it stand.]

“I haven’t really seen something in the GIF world like this before,” Lashes told me over the phone. Lashes, in addition to being a sort of GIF story editor for this music video and Torres’ manager, is making a name for himself as a “meme manager”—he’s also the brains behind improbable longevity of Grumpy Cat’s career. And he sees this project is evidence of an emerging trend.

“The music world and the Tumblr/GIF art world are joining up and that’s a pretty amazing thing,” he says. “The rules are changing and this kind of stuff is happening and artists are coming together.”

And this probably won’t be Nyan Cat’s last appearance in the EDM scene. Torres is taking a break after pulling long hours to get this video finished, but he’s established tight relationships with Risk and Skrillex, and his enthusiasm for the joyous atmosphere at their concerts is infectious.

You can check out the video for Zoom here, as long as you’re not inclined towards seizure (kidding, kind of):