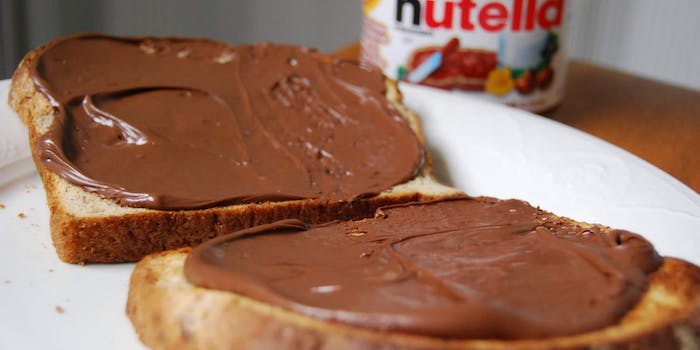 You can clean your computer with Nutella

And you thought it was just a delicious topping for crepes.

Nutella is a perfect, wonderful, delicious thing. Whoever came up with the idea of taking peanut butter and making it five times more delicious has my deepest appreciation (it was a baker named Pietro Ferrerro, a beautiful genius!).

Every Nutella fan has a long list of things they can do with the hazelnut spread. Put it on rice cakes. Toast. Apples. Eat it straight out of the jar with your handle whilst wearing a red shirt, like you’re a semi-refined, human version of Winnie the Pooh.

But did you know you could use it inside your computer?

Likely not. Thankfully, in honor of Nutella day, CoolerMaster (which makes CPU coolers), showed us how it’s done and used the substance as a thermal paste substitute, which can help keep the inside of your computer running efficiently. All you need is Nutella (which you obviously already have), an empty syringe, and then you heat the delicious spread and get to work.

Just a little of this…

Followed by some of that.

Watch the entire video for full instructions, of course.

Next time you don’t have to buy some fancy computer cleaner and are willing to sacrifice a dollop of Nutella, looks like you’ve got your fix.

Update 11:48am CT, Feb. 10, 2015: This article was updated to clarifying the Nutella is used as thermal paste after a computer has been cleaned instead of directy as a CPU cleaner.

Photo via ninacoco/Flickr (CC BY 2.0)