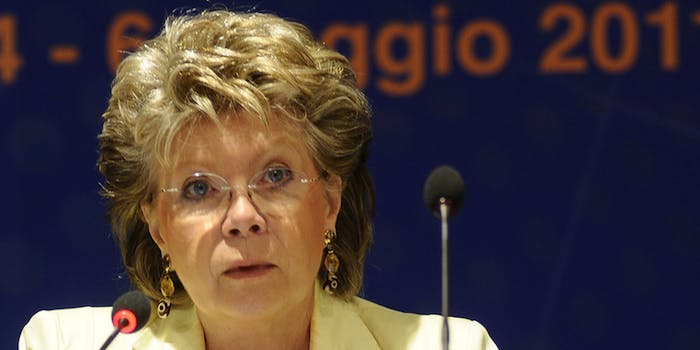 "Why listen to the phone of millions of innocent Europeans? This has nothing to do with fighting terrorism," said an EU official.

On Tuesday, the European Union Commissioner for Justice accused the United States of using its spy capabilities to gain an economic advantage over its European allies, CBS reported.

The accusation, made by Commissioner Viviane Reding, came following recent revelations that the U.S. National Security Agency had spied on the communications of private French and Spanish citizens, as well as Germany’s chancellor, Angela Merkel.

It is not clear whether the intelligence agencies of these various countries knowingly collaborated with the NSA and, if so, to what degree their leaders were aware of it.

“Why [is the U.S.] listening to the phone of a head of state, head of government?” Reding said to CBS. “[Why] listen to the phone of millions of innocent Europeans? This has nothing to do with fighting terrorism. Maybe it has to do with getting commercial secrets to be sucked out.”

Reding’s accusations imply the U.S. government was engaged in economic espionage which, broadly defined, means using spy capabilities to gain a technological or economic advantage over businesses of a foreign country.

Unlike espionage carried out in the name of national security, economic spying is openly shunned in the international community, especially among allies. The U.S. has itself taken a strong stance against it in trade negotiations with both European and Asian countries.

Elmar Brok, chairman of the European Parliament Committee on Foreign Affairs, told CBS news that the spying revelations about European allies and their citizens was “a very damaging thing” for the U.S.

“If all of the the citizens believe in Europe or in the World that America is spying on every individual citizen,” Brok said, “then I think people do not love America anymore.”