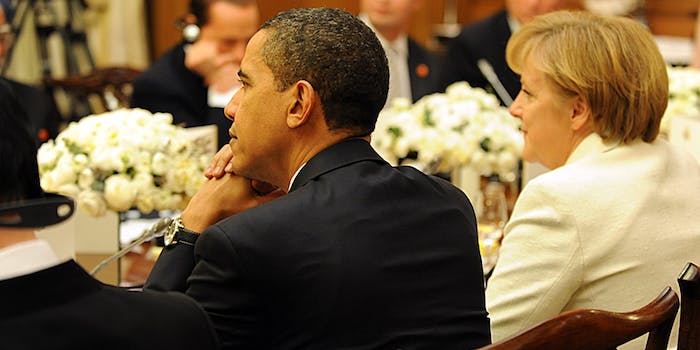 U.S. monitoring of Merkel has apparently ended, but Der Spiegel reports it started years before she became Germany's chancellor.

“The United States is not monitoring and will not monitor the communications” of German Chancellor Angela Merkel, White House Press Secretary Jay Carney said last week.

But according to German news magazine Der Spiegel, the U.S. bugged Merkel’s phone for 10 years, starting in 2002. At that time, Merkel was Secretary-General of her party, the Christian Democratic Union, and was considering a run for Chancellor.

Merkel’s mobile phone was on a list of targets for the National Security Agency’s Special Collection Service (SCS), according to Der Spiegel. The operation was run out of the U.S. embassy in Berlin, and a document obtained by the magazine said its exposure could cause “grave damage for the relations of the United States to another government.”

SCS reportedly ran 80 such operations worldwide, including branches in France, Spain, Italy, and the Czech Republic. It’s not clear whether SCS’ wiretaps of Merkel and other world leaders could record the content of conversations, or just metadata—when, where, and with whom each call took place.

President Barack Obama has personally apologized to Merkel, but he reportedly learned in 2010 that her communications were being monitored, and allowed the activity to continue.

According to German newspaper Bild am Sonntag, the White House later commissioned an extensive file on Merkel.

The diplomatic fallout of these revelations remains to be seen, but the German Foreign Ministry has summoned the U.S. ambassador to address the issue, a move nearly unprecedented since World War II. A delegation of German intelligence officials will travel to the U.S. next week to demand answers from the Obama administration.