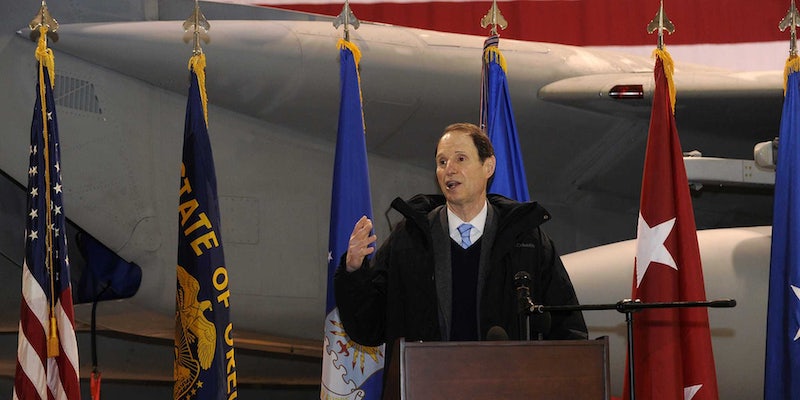 It sounds almost too paranoid to be true. Almost.

Is the National Security Agency tracking Americans’ locations through their cellphones?

It sounds almost too paranoid to be true. No government official has admitted it yet, but Sen. Ron Wyden (D-Ore.), sure seems to be hinting that’s the case.

Wyden is given more access than most members of Congress about top secret programs, but he’s also bound by law to keep mum about them. In a speech Tuesday, warning that the U.S. could become a “surveillance state,” he spoke broadly about both secret government surveillance and his inability to speak up about the details:

From my position on the Senate Intelligence Committee, I have seen government activities conducted under the umbrella of PATRIOT Act that I knew would astonish most of our people. … The Senate rules about classified information barred me about giving out any specifics. And so we came to describe what was going on as essentially secret law, a secret interpretation of the PATRIOT Act, issued by a secret court, that authorizes secret surveillance programs.

But then, Wyden did an odd thing. He changed his tone and, seemingly out of context, spurted a blurb about smartphones:

Ponder that most of us here have a computer in our pocket that potentially can be used to track and monitor us 24/7.

Christopher Soghoian, senior policy analyst at the ACLU’s Speech, Privacy, and Technology project, thought it was no coincidence:

Until a FISA order ordering a phone co to hand over cell location data is leaked, I don’t think Sen Wyden can be any clearer w/ his warnings

We already know, thanks to Edward Snowden‘s leaked documents and the subsequent government admission, that the NSA tracks the time and location of nearly every phone call made in the U.S. But thus far, government officials have indicated that the U.S. doesn’t track Americans’ cellphone locations in bulk.

However, Julian Sanchez, a research fellow at the Cato Institute, told the Daily Dot that those statements might be deliberately misleading:

Thus far, officials have been strongly denying bulk collecting location data ‘under this program.’ What I have not heard anyone say is ‘there is no bulk collection of domestic location data’ or ‘we only location-track with a full FISA warrant’ or ‘we only get location records for individuals reasonably believed to be agent of foreign powers.’

So there you have it. The NSA might not be listening, but they sure might know where you’re going.