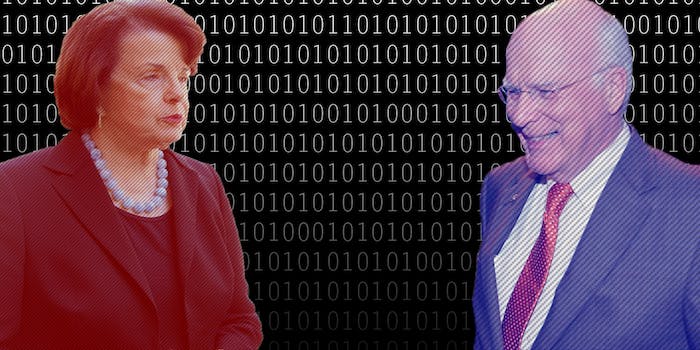 Sen. Dianne Feinstein has received three times as much as her idealogical opponent in the debate over NSA spying.

Senators Dianne Feinstein (D-Calif.) and Patrick Leahy (D-Vt.) are locked in a tight battle over the National Security Agency‘s practice of collecting the records of practically every phone call made by practically every American. Leahy has introduced a bill to end it. Feinstein wants to make it more expressly legal.

Unsurprisingly, an analysis of campaign contributions shows that Feinstein gets three times as much money from intelligence contractors.

Leahy, a longstanding opponent of the government’s ability to tap Americans’ communications, is the author of the Intelligence Oversight and Surveillance Reform Act, the Senate counterpart to Rep. Jim Sensenbrenner‘s (R-Wis.) bill in the House, the USA Freedom Act. The bills would create a host of checks to what many see as unbridled NSA spying, including ending the bulk collection of Americans’ phone metadata.

Feinstein, the chair of the Senate Intelligence Committee, penned that bill’s counterpart, the FISA Improvements Act, which would clarify the murky legal understanding of section 215 of the Patriot Act, which FISA Courts have interpreted to mean the NSA can track and store everyone’s call records.

Needless to say, privacy advocates tend to support Leahy’s bill and are wary of Feinstein’s.

Lobbying watchdog group Maplight conducted a study by looking at contributions that the top 20 Department of Defense intelligence contractors gave to members of the Senate. Since 2007, groups like Lockheed Martin and Northrop Grumman have given a total of $107,050 to Feinstein, but only $35,300 to Leahy in the same period. General Dynamics, which sells NSA-approved encryption technology, singlehandedly gave Feinstein $43,750, more than all others gave Leahy combined.

Of course, politics being what it is, Leahy’s no saint when it comes to other areas of concern to Internet activists. He’s long been accused of being in the entertainment industry’s pocket. He authored the controversial Protect IP Act , the Senate counterpart to the Stop Online Piracy Act, and even got to appear in the two most recent Batman movies by tapping his Hollywood connections. On Wednesday, one of Leahy’s top “intellectual property advisors,” Aaron Cooper, left his staff to join the anti-Internet piracy lobbying firm Covington and Burling.