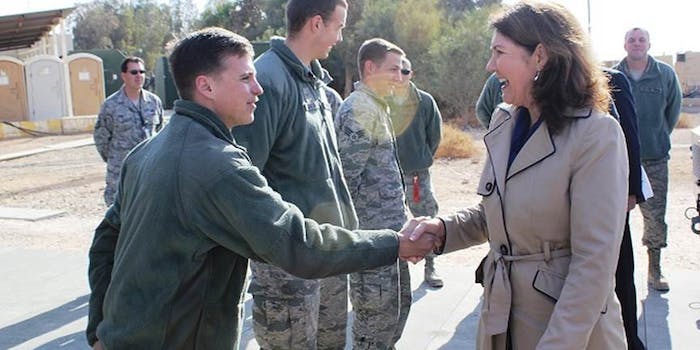 Republican politicians finally figured out how to use the Internet as a campaign tool, and they’re really proud of themselves. Unfortunately, the GOP’s newfound Web savvy has taken the form of a campaign program that’s ethically questionable, intensely negative, and may or may not be against the law.

The National Republican Congressional Committee created a spate of fake websites for Democratic candidates that at first glance look like normal, legit sites, but then rip into the candidate in the text. The faux sites also have donation forms that send funds to the NRCC. There are several fake microsites up now, and the committee says it’s buying up URLs to create even more.

So is this shit even legal? It’s not an easy thing to answer. The spoof sites teeter on the fine line between parody and fraud, and the devil is in the details of the election law. According to Federal Election Commission regulations, political groups can’t use a candidate’s name in a “special project”—like a website—unless it “clearly and unambiguously shows opposition to the named candidate.”

In other words, if it’s totally obvious the site is just a digital attack ad and a poor excuse for a joke, it’s fair game. If not—say, if someone actually donates money to the NRCC thinking that they’re giving it to the Democratic candidate—that could constitute fraud. Oh and guess what, that already happened, to this Florida man who was duped into contributing funds to the NRCC by a fake candidate site. The Republican committee refunded the money.

The trouble is that determining whether something is clear and unambiguous is subjective as hell. Naturally, right-wingers are saying the website trick is incredibly clever and obviously just a ruse, and they’re just outplaying Democrats. The left, on the other hand, claims the sites are confusing to voters, which violates FEC rules.

Where are the nonpartisan experts in this? “The law seems pretty clear to me and the sites along these lines that I’ve looked at the past few months seem to clearly violate Federal Election Commission regulations,” Paul S. Ryan of the Campaign Legal Center said in an interview with Time. “In my view it is not the case that these websites clearly and unambiguously show opposition. On the contrary the URLs of these websites would lead a reasonable viewer to think the websites are supporting the candidate.”

Election law attorney Joseph M. Birkenstock told Talking Points Memo it’s not obvious these are opposition sites. “This is different. This is the first time I’ve seen one where they use a banner where by its own terms is actually express advocacy on behalf of that candidate,” he said. “One word at the end of the line contradicts the banner and contradicts the URL.”

Read the full story on Motherboard | Photo via Ann Kirkpatrick