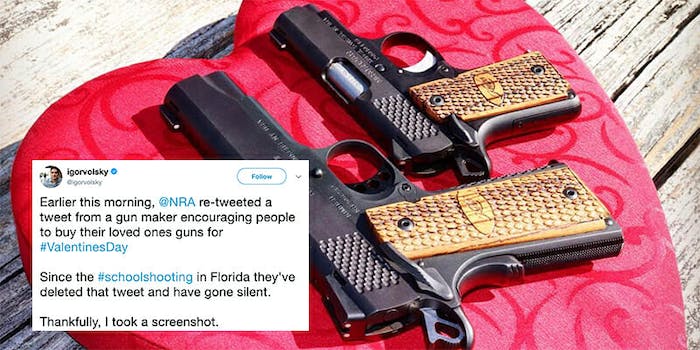 It was deleted following news of a school shooting.

The National Rifle Association (NRA) reportedly retweeted a post on Wednesday from a gun maker encouraging people to buy guns on Valentine’s Day, then deleted the retweet following news of a shooting at a high school in Parkland, Florida.

Igor Volsky, deputy director of left-wing research and advocacy organization Center for American Progress Action, posted a screenshot of the NRA’s deleted retweet. It showed a photo of two handguns atop a red heart with the caption, “Give your significant other something they’ll appreciate this Valentines Day.”

“Since the #schoolshooting in Florida they’ve deleted that tweet and have gone silent,” Volsky wrote.

Earlier this morning, @NRA re-tweeted a tweet from a gun maker encouraging people to buy their loved ones guns for #ValentinesDay

Since the #schoolshooting in Florida they've deleted that tweet and have gone silent.

Thankfully, I took a screenshot. pic.twitter.com/cC4A835n0a

The original photo was posted to Instagram on Feb. 2 by Jim’s Firearms of Florida, a gun dealership located in Pensacola.

At least 17 people were killed in the shooting that occurred Wednesday at Marjory Stoneman Douglas High School in Parkland. The shooting suspect, Nicolas Cruz, is in custody.

As of Wednesday afternoon, the NRA had not tweeted in acknowledgment of the shooting or followed up on the deleted Valentine’s post.