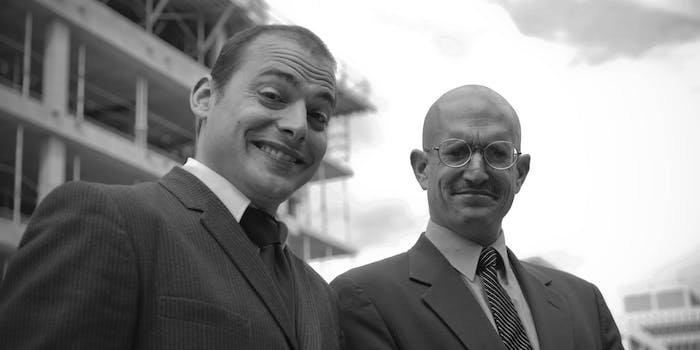 This is probably the worst attempt to keep viral content from the internet in recent history.

A legal notice filed by the National Rifle Association over a parody website has apparently caused roughly 38,000 websites to get knocked offline.

As reported by Motherboard, the NRA issued a takedown request in response to a fictitious NRA website promising to deliver “life-saving firearms” into “poor urban centers.”

An accompanying video, which bears the NRA’s logo and opens with scenes of police brutality targeting African-Americans, has been attributed to the world-famous Yes Men.

The Yes Men is an American activist duo comprised of Jacques Servin and Igor Vamos. They are known primarily for their films in which they impersonate officials from various corporations and government agencies. Their ensuing pranks consistently underscore instances of political and socioeconomic oppression targeting the world’s most vulnerable communities. In their latest film, The Yes Men Are Revolting, the twosome target various organizations engaged in climate change denial.

This week, the Yes Men launched a website called Share the Safety, which purported to be a joint effort by the NRA and weapons manufacturer Smith & Wesson to arm America’s urban poor. “You know how important it is to protect your family,” the website read, prior to being taken down. “But you may not know that some of America’s poorest citizens cannot afford to arm themselves against those who would limit their freedoms.”

The Share the Safety faux-website promised to donate a gun to a citizen in an “at-risk neighborhood” whenever someone purchased one of three limited-edition Smith & Wesson handguns. The program quickly spread on Twitter and other social media platforms under the hashtag #SharetheSafety.

According to Motherboard, the website was shut down after the NRA issued a complaint, likely alleging a trademark violation, as opposed to a notice under Digital Millennium Copyright Act (DMCA). The Yes Men website was apparently published via an automated web service called Surge—which was, in turn, hosted by a cloud-computing provider DigitalOcean. When DigitalOcean shut down Surge’s account, it reportedly knocked down not only the Yes Men’s parody site, but 38,000 others as well.

“We spoke to [DigitalOcean] a couple hours ago on the phone,” Surge said addressing the downed websites on Twitter. “They said we needed to file a counter claim or risk being taken down. [A]fter asking for counterclaim documents minutes after getting off the phone we were instead shutdown because they had changed their mind.”

DigitalOcean provided the Daily Dot with the following statement, which says the websites hosted by Surge were restored in less than two hours.

“On June 23rd, we received notice from the NRA’s counsel that sharethesafety.org was infringing NRA’s trademarks. The NRA demanded that we remedy the problem by removing the material. In response, we followed our standard procedures for trademark infringement notices and informed the customer immediately of the NRA’s demands. We provided more than 5 days for the customer to respond to or resolve the issue. We also spoke to the customer on several occasions to inform them that we intended to take action on the trademark claim. They chose not to remove the violating material. Accordingly, our Trust & Safety team restricted network access to their Droplet, which caused an outage to all of their user’s websites hosted on that Droplet. In less than 2 hours of the outage, the customer was able to address the trademark notice, and network access was immediately restored.”

Servin and Vamos’s “NRA and Smith & Wesson ‘Share the Safety’ promo video” remains on YouTube, however, ostensibly because the Google-owned company is aware that parody videos, such as those made famous by the Yes Men, are protected under U.S. trademark law.

As is customary whenever a powerful organization attempts to eradicate viral content, the Yes Men videos will now almost certainly be seen by nearly everyone on the internet.