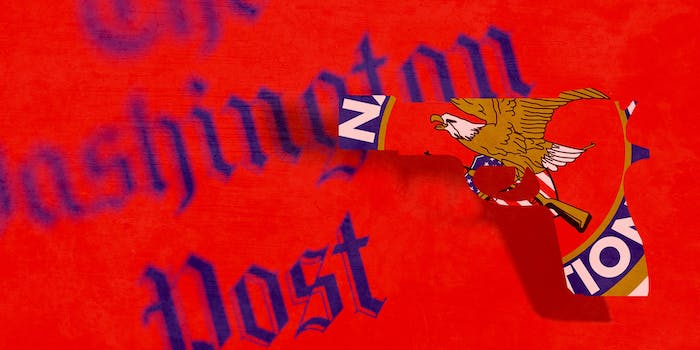 NRA calls the Washington Post 'once upfront' about the ban on assault rifles.

Following a deadly mass shooting in Orlando that left 50 dead and 53 injured, many politicians and civilians have called for gun control and stricter laws for purchasing assault rifles.

Assault rifles were reportedly used in seven out of the eight high-profile mass shootings that have occurred since July 2015, and in a recent article, the Washington Post addressed their popularity. While initially calling out AR-15s specifically—since it was first believed that this was the weapon used in the Orlando shooting—the Post later clarified that the weapon Omar Mateen used was a Sig Sauer MCX.

The newspaper claimed that while these weapons are different, both are lethal.

“One common denominator behind these and other high-casualty mass shootings in recent years is the use of assault-style rifles, capable of firing many rounds of ammunition in a relatively short period of time, with high accuracy,” Washington Post wonkblog writer Christopher Ingraham noted.

Ingraham continued: “On the other hand, compared to other firearms, assault-style rifles make it fairly easy to kill or injure many people in within a short period of time. So perpetrators wishing to inflict indiscriminate harm on a large crowd of people often turn to them.”

However, the NRA wasn’t too pleased with the Post‘s criticism of assault rifles. In a recent tweet, it said the online publication was “once upfront” about the role of assault weapons in mass shootings, referencing an article the Post wrote in 1994 about the crime bill.

.@Washingtonpost was once upfront about the goals of an "assault weapons" ban https://t.co/TiLkQv5alj pic.twitter.com/GqmC20NRav

Following the Orlando shooting, Chris Cox, the executive director of the NRA Institute for Legislative Action, wrote an op-ed in USA Today, where he blamed the attack on “radical Islamic terrorists” and the Obama administration rather than guns.

The Post was recently banned from all Donald Trump press events after its coverage of Trump during the Orlando shooting. The presumptive Republican nominee was also recently endorsed by the NRA for the presidency and is expected to meet with NRA leaders to discuss barring individuals on the terror watch list and “no fly” list from purchasing guns.

As of this publication, the Post has not responded to the NRA’s claim.