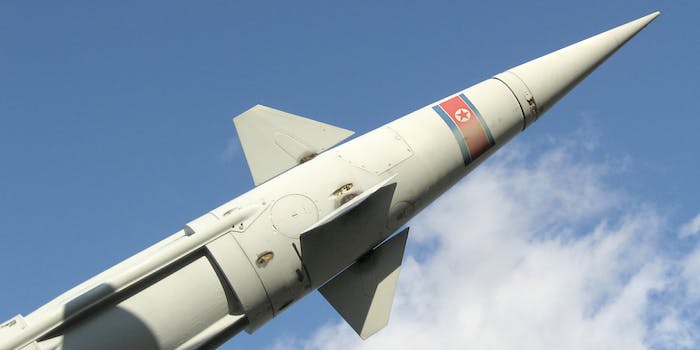 North Korea this week threatened to launch a nuclear attack on the United States at the first sign of aggression from the U.S. Navy strike group that President Donald Trump ordered to the Korean peninsula.

The warning came on Tuesday via the dictatorship’s state-run media channels.

“Our revolutionary strong army is keenly watching every move by enemy elements with our nuclear sight focused on the U.S. invasionary bases not only in South Korea and the Pacific operation theater but also in the U.S. mainland,” it said.

A furious Trump lashed back on Twitter, urging the Chinese government to help mitigate the escalating tensions:

Trump and Chinese President Xi Jinping met at his private Mar-a-Lago resort in Florida last week and reportedly discussed the “North Korean problem” at length. Secretary of State Rex Tillerson said that both leaders agreed that the country’s nuclear program had reached a “very serious stage.”

On Monday, Seoul officials announced that, following meetings, China and South Korea had both agreed to tougher sanctions on the North. China imposed an import ban on North Korean coal in February, despite this being its poverty-stricken neighbor’s most significant export.

Talk of new sanctions on Monday came with news that the USS Carl Vinson aircraft carrier and its support ships have been ordered to the western Pacific as a show of force, despite having been scheduled to travel to Australia.

Tensions had been rising over North Korea’s ongoing nuclear and ballistic missile tests for years, but following Trump’s military strike against the Syrian government last week, in response to a devastating regime chemical weapons attack, officials have ventured that similar action is on the table for dealing with North Korea.

The country is expected to be preparing its sixth nuclear test at the moment, working to develop long-range nuclear missiles capable of reaching the U.S. western seaboard.

North Korea quickly criticized the American strike group’s move as an example of the Trump administration’s “evermore reckless moves for a war” and slammed the cruise missile strike against Syria.

“We never beg for peace but we will take the toughest counteraction against the provocateurs in order to defend ourselves by powerful force of arms,” the statement continued.

South Korea, considered alongside Japan to be a diplomatic ally of the U.S. in the region, was keen to tame the fiery war of words.

“We’d like to ask for precaution so as not to get blinded by exaggerated assessment about the security situation on the Korean peninsula,” the country’s defense ministry spokesperson said.