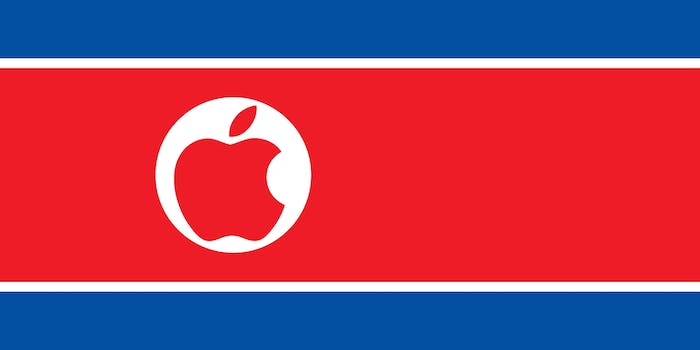 Red Star OS isn't the most original UI ever.

While the rest of the world rapidly becomes more interconnected, North Korea has managed to keep much of its culture a secret. But thanks to a batch of leaked screenshots, we now can take a glimpse at the country’s latest state-approved operating system.

And it looks shockingly familiar.

The latest update to homegrown software Red Star OS, Version 3.0, copies its user interface straight from Apple’s Mac OS X, from the icons floating on the translucent gray bar at the bottom of the screen, to pop-up windows identical to those of the OS X Finder.

The screenshots, taken by computer scientist Will Scott, were first shared on Computerworld. Scott obtained the software during his time in Pyongyang, where he spent the past semester lecturing at the Pyongyang University of Science and Technology.

This isn’t the first time North Korea has played around with influences from American companies. The previous version featured a desktop reminiscent of Windows 7. The latest software also features a Web browser based on Mozilla.

“It really does look mac-like, and is using a skin that as far as I can tell is custom made rather than being modified from an existing Linux theme,” Scott wrote on his website. “Apps are packaged using a mac-like folder structure as well, with ‘contents’ and ‘Resources’ folders within the application folder.”

The software also supposedly uses a calendar that begins with the birth of Kim Il-Sung, North Korea’s first leader, in 1912.

Why Red Star moved away from Windows 7 and toward an Apple-influenced design is unknown, though it shouldn’t be big surprise given Kim Jong-Un’s ardor for Macs.