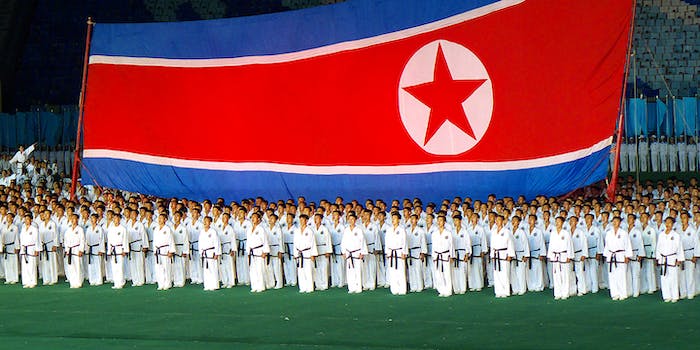 Does this definitively explain the Sony hack?

President Obama had “no doubt” that North Korea was responsible for the 2014 Sony hacks because of a newly revealed NSA breach of the dictatorship’s networks provided strong evidence of responsibility, the New York Times reports.

The hacks, apparently prompted by the movie The Interview’s depiction of Korean leader Kim Jong-un’s assassination, led to threats of violence against theaters that showed the movie.

The National Security Agency’s infiltration of North Korea stretches back at least to 2010. The Times credits “former United States and foreign officials, computer experts later briefed on the operations, and a newly disclosed NSA document” as the basis for the information.

The new revelations help bolster the claims that North Korea was responsible for the Sony hack. However, skepticism remains.

“Once again, it’s healthy to be skeptical,” computer security analyst Graham Cluley explained on his blog, “especially as those speaking to the media continue to do so anonymously, with no ability to question their motives for leaking information.”

After a period of silence and doubt, American authorities placed blame for the Sony hack directly on North Korea late last year. However, no actual evidence was presented to back up the claim. Security experts expressed profound skepticism about what Americans did say in public.

When the FBI claimed that the attack came from IP addresses used by North Koreans, experts pointed out that IP addresses can be spoofed, locations can be faked. This alone cannot be taken as evidence of the crime’s origin.

When the Bureau then said that the code used in the attack had been used by North Korea in other attacks, experts again rightly pointed out that code was often reused in the world of hacking.

Now, however, American authorities are doubling down on their certainty. Although they’re still not releasing much in the way of evidence, they are going to great lengths to explain just why they are so sure that North Korea is responsible for the attacks.

North Korea has been notoriously difficult to infiltrate physically and digitally, so Americans have been reluctant to publicize their intelligence-gathering methods. Despite the fact that there still has been no evidence presented, this new NSA hacking story is widely seen as an attempt to gain credit for the FBI’s assertions.

Skepticism among information security experts about the FBI’s claims remain and are likely to remain for as long as evidence is not introduced to the public. On top of the lack of evidence, every official speaking to the Times in this article did so anonymously, making it impossible to know their motives or hold them accountable for their claims as the truth becomes known.

Additionally, there is another question now at play: “If the NSA were secretly spying so comprehensively on the networks used by North Korea’s hackers, how come they didn’t warn Sony Pictures?” Cluley asked. “And what does that say about the United States’s national security efforts—have other attacks against corporations gone unnoticed?”